A preview of Barcelona's second pre-season friendly, as the Blaugrana prepare to take on Valerenga IF at the Ullevaal Stadion in Oslo

Share All sharing options for: Valerenga IF vs FC Barcelona: Match Preview

FC Barcelona will take to the field tomorrow at the Ullevall Stadion in Oslo, where they will take on Valerenga in their second friendly of pre-season. Having slipped to a 2-0 defeat at the Allianz Arena on Wednesday against Bayern Munich, Barcelona will be keen to return to winning ways, even if they are still without a string of first-team players. New coach Gerardo Martino was unveiled this afternoon – and will travel to Oslo – but will not be taking charge of the team; instead Rubi and Jordi Roura will lead the team for the second match in succession.

Much like Lechia Gdasnk, Valerenga are currently in the middle of their league campaign and are even scheduled to host Sarpsborg 08 on Monday night, meaning that this pre-season friendly is likely to be fairly low down on their list of priorities. With just 21 points from their 16 matches, Valerenga are currently languishing in mid-table in the Eliteserien – and a loss to Sarpsborg could threaten to drag them perilously close to the relegation zone. While the players will be keen to impress against such illustrious opposition, they’ll also know that the league fixture is their most important match of the weekend.

Head coach Gerardo Martino is travelling to Oslo, and will watch tomorrow’s match from the stands, but is not expected to have any input on team selection – instead Jordi Roura will once again lead the squad, with Rubi as his assistant. It’s not yet known whether Rubi or Jordi Roura will be staying on at the club once Martino officially takes charge – although reports suggest that Martino is looking to keep one of the two, with rumours inferring that Rubi will be kept on, while Roura will either leave the club, or take on a new role. And if that’s the case, then I’m sure Roura would love to go out on a positive note!

Jose Manuel Pinto will start in goal once again, and after conceding a relatively "soft" goal against Bayern Munich, the veteran Spaniard must have his eyes set on a clean sheet. Valerenga’s attack has mustered just 21 goals in 16 fixtures and their top-scorer Morten Borre has managed just six goals – hardly worrying stuff. Given that Borre is a veteran himself (at 37 years of age), it’s even possible that he’ll sit out a portion of this match, assuming he isn’t capable of playing two full matches over a three-day period. Certainly, I would be targeting a clean sheet if I were in Pinto’s shoes.

Oier Olazábal could play in the second-half, just as he did on Wednesay night; captaining a second-string line-up who more than held their own against Bayern Munich before Mario Mandzukic’s late tap-in. In those 45 minutes, Oier made a couple of good saves – but his future at the club remains a mystery. Will he leave on loan? Stay and fight for the few minutes that he could win off of Pinto? Perhaps leave on a permanent basis? It’s just one of the many decisions that Martino will be forced to make over the coming weeks.

In defense, expect the same back-line that started on Wednesday against Bayern Munich; Martin Montoya will start at right-back, presumably hoping for an easier 45 minutes than his first-half against Franck Ribery. Marc Bartra will start alongside Javier Mascherano in the centre of defense – despite (rumoured) interest from Valencia – and Adriano Correia will complete the back-line after his Man of the Match performance against Bayern at the Allianz Arena.

Alex Song will start at pivote – and I was relatively disappointed with his performance on Wednesday, as the Cameroonian midfielder struggled to make his presence known against the Bayern midfield. Defensively, he contributed a fair amount – but I was hoping for a bigger "impact" from the former Arsenal star. Instead, he looked a little lost at times, although hopefully that was down to a lack of match practice rather than a lack of understanding of his role in the starting XI. 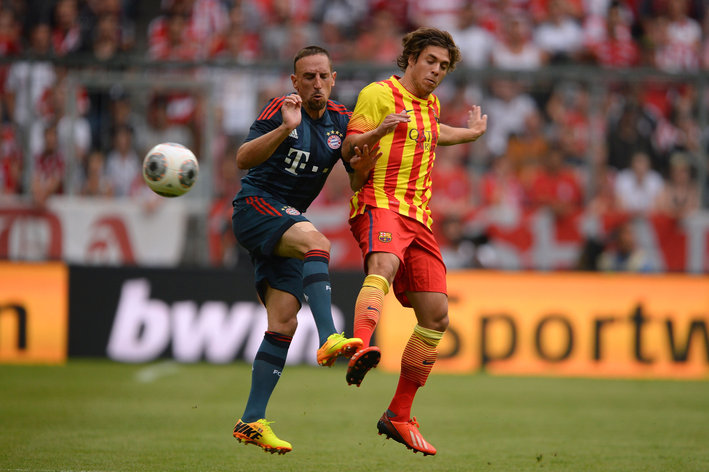 In a summer of change at the Catalan capital, 21 year-old midfielder Sergi Roberto has replaced the departed Thiago Alcântara in Barcelona’s first-team squad, raising a number of questions about Barcelona’s future midfield

Song will be joined in midfield by Sergi Roberto, who impressed many with his hard-working display on Wednesday. In fact, in a poll on the website for Catalan newspaper El Mundo Deportivo, Sergi Roberto was voted as Barcelona’s "MVP" for the match – testament to his efforts in the centre of the park. If he can follow that up with a good performance tomorrow, maybe Roberto will be able to impress new coach Gerardo Martino, possibly earning himself some more minutes, or at least some favour with the new boss?

Similarly, Jonathan dos Santos will be looking to make an impression on Martino as well, particularly after he confessed that JDS was "part of his plans" at the club. Widely expected to leave the club on loan, dos Santos now has a chance to force himself into the first-team picture, possibly earning his own share of the minutes that Thiago would have otherwise played. And being honest, he deserves it too; JDS stuck around despite a lack of minutes, and now looks set to benefit – hopefully he will be able to finally make a name for himself with the first-team, unlike his brother Giovani who has effectively wandered around Europe searching for a "second chance" after leaving Barcelona a few years ago looking for first-team football.

In attack, Lionel Messi will certainly start again, and is expected to captain the side as well, just as he did on Wednesday against Bayern. Leading by example, Messi nearly opened the scoring that night with less than a minute on the clock; before drifting out of the game thanks to a disciplined and efficient Bayern display. Ideally, he will be searching for his first goal of pre-season, and few would back against Messi from delivering, particularly against a Valerenga defense that boasts one of the worst records in the Norwegian top division.

Cristian Tello and Alexis Sánchez will probably start in support of Messi, and Alexis is in desperate need of a good performance – I thought he was practically anonymous against Bayern Munich, aside from his one cross, which was nearly inadvertently converted by Rafinha. If he wishes to secure his place in the first-team ahead of Pedro, he’s going to have to deliver, especially against opposition like Valerenga. Tello on the other hand is in a bit of tricky situation – no matter how well he plays, he’s unlikely to displace Neymar – but would a string of good performances move him into contention for the remaining offensive spot – even if it is likely to be on the right?

I’m sure I’m not the only one who would be intrigued by a Tello-Neymar-Messi frontline...

It’s been two weeks exactly since Valerenga last took to the field, and as a result of that extended break, they enter tomorrow’s break with a strong, 22-man squad – with 30 year-old midfielder (and captain) Christian Grindheim the only absentee, as he misses out through injury. Newcomer Nicolai Høgh has made the cut, after joining from Danish highfliers, Esbjerb fB and Daniel Braaten could also feature. The former Toulouse and Bolton Wanderers winger has been training with Valerenga in recent weeks, and presumably will be looking to earn himself a permanent contract with the club. The full squad is listed below, and Valerenga manager Kjetil Rekdal has admitted that each member of the squad is likely to see some playing time.

Barcelona should find it a lot easier against Valerenga, and one expects them to emerge victorious, even without a significant amount of match practice. I’m going for a 3-0 first-half, and a 4-1 final score.