What Kind Of Role Will Carles Puyol Play In The Future?

It's no secret, club captain Carles Puyol is reaching the twilight stage of his career but what kind of role will he play in the coming season?

Share All sharing options for: What Kind Of Role Will Carles Puyol Play In The Future?

Puyol first joined FC Barcelona in the 1995 and spent a large part of his early career deciding what position was best for him. Puyi played goalkeeper, right back, defensive midfielder and even as a striker before settling as a central defender. After graduating from La Masia and spending two years with Barcelona B, Louis Van Gaal promoted Puyol to the first team and the then 21 year old made his senior debut against Real Valladolid.

After acquiring the captaincy in 2004, Puyol has become an icon of FC Barcelona and a constant source of inspiration for the younger players coming through the ranks. But the number five can't play for ever and has to work on his role as a limited defender.

Puyol has recently undergone knee surgery and while it is unlikely to keep him out of any matches, it adds to what seems to be a never ending list of injuries which has affected him. This graphic, taken from Mundo Deportivo and in Spanish, shows just how many injuries Puyol has overcome in his career. 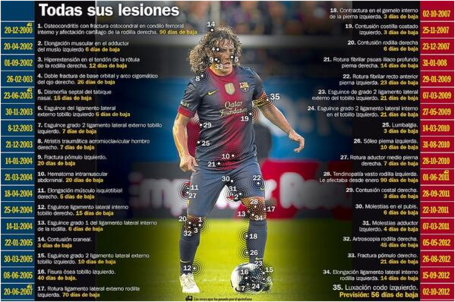 To start, he will have to play using his head more than ever as he no longer has the speed to win a straight race with the likes of Cristiano Ronaldo. Meaning he will need to be one step ahead if he is able to defend well.

He will also have to be coached well. Playing every game of the season is out of the question now and Tito Vilanova will need to be smart about which games he chooses to play his ageing captain.

When Puyol isn't playing it is important he works with the other captains at the club and remains a vocal if not physical presence at the club. Which I doubt anyone would question if he would fulfil this role as the Spaniard looks as if he was born to lead.

Unlike before, the club seem to doubt the youth coming through. Marc Muniesa has just left for free to join a side at the other end of the football spectrum, Stoke City. While Andreu Fontàs has left with a buy-back clause for Celta and ex-Barcelona B boss Luis Enrique. Marc Bartra has had more game time than most but appears to have left Vilanova unconvinced.

So it looks like Barcelona will need to bring in another defender this summer. Every week it seems a new name is linked with the Catalans and my fellow writers have been trying to make sense of the rumours, but the name that has been consistently mentioned is Thiago Silva although there is still no clear evidence of an attempt to sign him from Barcelona.

Perhaps one of the deciding factors in the Thiago Silva saga is the PSG's defender's age. The 28 year old would be one of the senior members of the group if he joined the club and for a club who pride themselves on thinking for the future, it appears to be an expensive quick fix.

One thing is not in doubt though, Puyol will go down as a legend in FC Barcelona's history. For me his greatest moment came in Wembley 2011, when he had the chance to lift the Champions League trophy, at the same ground where the club won their first, but instead handed it to Eric Abidal. Just one example of the heart Puyol plays with every match.