Jonathan Dos Santos: Did He Make The Right Choice by Staying at Barça?

FC Barcelona will have an extra midfielder this upcoming season as Jonathan Dos Santos has decided to stay with El Blaugrana. But while many fans are wondering why he would stay on the team since he may not get playing time, is it fair to judge him for chasing his dream of succeeding at Barça?

Share All sharing options for: Jonathan Dos Santos: Did He Make The Right Choice by Staying at Barça?

On Wednesday, FC Barcelona midfielder and Mexican international Jonathan Dos Santos tweeted out to the world that he has decided to stay at the club, and not pursue a loan move which may have given him more playing time.

Translation: "I inform you with great joy that I will stay at Barça. Now I see completing/fulfilling my dream is closer than ever, triumphing at Barça!"

"Thanks to the club and the coach for the trust they're showing me!! Visca el Barça!!"

Many fans and media were expecting "Johnny Two Saints", as I call him, to leave Barcelona to pursue more playing time. Rumors had surfaced that Dos Santos would head to Real Sociedad, who was reportedly interesting in his services. During his official presentation new FC Barcelona manager, Gerardo "Tata" Martino said he counts on Johnny Two Saints for the upcoming season. "We count on all the players that are on this squad, and Jonathan is in my plans."

While there are unconfirmed reports of a sit-down between the player and Martino, it is clear that at some point within this past week that Dos Santos talked with Martino, and Tata must have reassured Jonathan that he was going to get playing time.

Should Jonathan Have Left? Does Dos Santos Deserve to Stay at Barça?

There are plenty of Culés out there who are not Jonathan Dos Santos fans. Some fans are not too thrilled about Johnny staying.

I know there are some fans who think Jonathan Dos Santos has been disappointing the few times he has played on the first squad, but let's step back and think things through. "Jona" has not gotten much playing time with the first squad due to the talent the club has at the midfielding position. Yes, when he has been on the pitch, he has struggled a bit. That is on Dos Santos and he needs to step it up, no one can deny that.

With all due respect to Tito Vilanova, but Tito never had any confidence in Dos Santos. He wouldn't give him a shot. Sure, perhaps Jona didn't give Tito much of a reason to play him more, but Tito needed to throw him in there to see if there was anything Dos Santos could contribute for the season (2012-13) before potentially selling him or loaning him out. Tito, as much as I admire his strength and knowledge, was too stubborn and as we saw with Thiago Alcantara, it led to both Dos Santos and Thiago not getting enough time on the pitch. 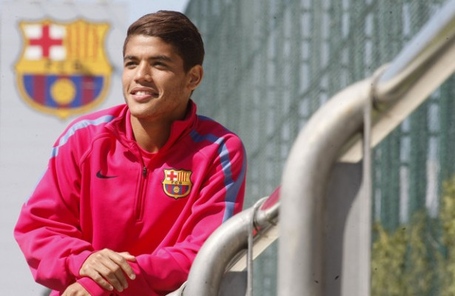 And who are we to say he shouldn't stay and go for his dream?

I'm not writing this article to say Jonathan Dos Santos can be like Thiago Alcantara was for Barça, or that he will shine like Sergi Roberto may potentially shine, or even that he'll be a game-changer on the pitch.

All I'm saying is that all FC Barcelona fans should put a stop to critiquing Jonathan's decision to pursue his dream. I'm not trying to sound cheesy, but I respect Jonathan's decision and why he is choosing to stay. I'm sure he would have gotten much more playing time at another club than he'll probably get at Barcelona, but he is confident in his abilities and he wants to be here. What can you do? One thing I will say is that I like his confidence.

With the aforementioned Thiago gone, the team will need an extra midfielder to play in those games that may not need all the starters to play, like early-round Copa del Rey games or garbage-time action late in Liga or Champions League games. With Sergi Roberto being in front of Jona in the midfielding depth chart, Jonathan can be that midfielder that comes into the game in the 70+ minute of a 4-1 game. Jona could start in a meaningless game like a CL game when Barcelona is already qualified for the KO stage, or Copa game that doesn't have much significance.

Jonathan Dos Santos has to start off as a sort of "garbage-time player" if he wants to be a part of the regular rotation. Obviously, there are tremendous midfielders on the club, so Jona will have to work his way up. But it is not impossible that Tata Martino works Jona more and more into bigger games IF Dos Santos shows progress.

To conclude, let me just say that while I have been defending Jonathan Dos Santos when it comes to him following his dream, let's be clear: Jonathan has a great amount of personal pressure on his shoulders. If Jona fails at Barcelona, this will be the first time we can all agree it was his own fault and not have his manager not play him contribute to his shortcomings.

Why can we stay that?

Because for the first time in his club career, Jonathan has a manager that not only believes in his talents, but also will not hold back on calling his name to play. Pep Guardiola and Tito Vilanova were never realistically going to give Jona a shot. Tata Martino will send Jona out on the pitch to prove his merit.

Time to show us that you made the right decision to follow your dream at FC Barcelona, Jonathan. I honestly hope you contribute to the club. I don't expect you to be the next Xavi, but I do hope you play well enough to continue earning good playing time.

This is what you wanted, Johnny Two Saints. You have been patient, now this season is your time to make your dream come true and contribute to this club.

Go make your dream a reality.