A tactical examination of Barcelona's determined and impressive beginning to the 2013/14 La Liga campaign.

Share All sharing options for: Barcelona 7 - 0 Levante: The Tactics

A stroll through the park, that. Regardless, Gerardo "Tata" Martino’s debut could not have gone better as the Argentine unveiled a new era at the Camp Nou.

As a result of a summer that saw the dramatic exit of Thiago, the promising arrival of Neymar and an intriguing managerial change brought about by Tito Villanova’s health-induced resignation, all eyes were on Barcelona’s season opener against Levante. And what an opener it was. For months now we’ve speculated over the shape and style Tata’s Barca would play with – and now we finally have our answer. Using a high pressing tempo and a directness that hasn’t been seen at the Camp Nou since the 2009/10 season, Barcelona kept the ball at the possession rates we’ve become so accustomed to, only adding to it decisiveness that saw the home team hit for six goals in the opening half. Coupled with this we saw the typical 4-3-3 employ actual wingers, providing actual width, opening up increased space for Xavi, Fábregas and Messi in the middle of the park.

While Barça certainly began in the traditional 4-3-3, as it became more and more apparent that the ball – and thus the players – would be staying in the Levante half, the formation essentially shifted into a 2-5-3, or because Busquets did stay rather deep most of the game, a 2-1-4-3. As for Levante, well, it’s hard to denote their formation as they played so little of the game with the ball: in defense, they played a 4-4-1-1, using two banks of four to try and keep the home side at bay. On the rare occasion (and I do mean rare) Levante managed to break across the halfway line, they went forward in a 4-2-3-1, with David Barral leading the line. (Side note: these diagrams don't typically have nineteen players in the same half, but such was the dominance displayed by the home side on this occasion.) 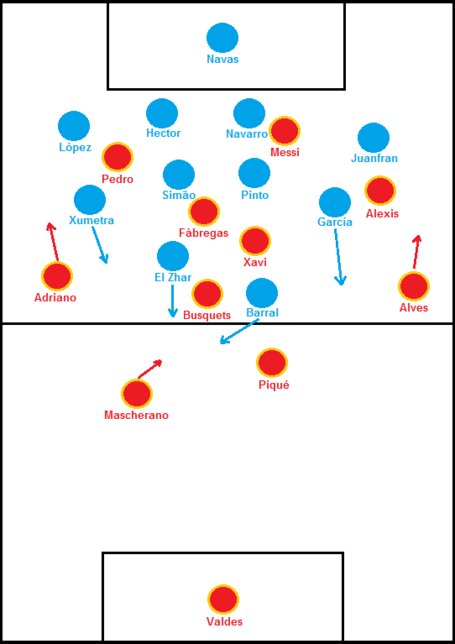 Over the last few seasons, Barcelona have become increasingly complacent after losing the ball – failing to push forward as a cohesive unit to quickly win it back. But oh how that changed on Sunday. Tata’s influence was noticeable from the start, as the entire team pushed forward, shrinking the playing field down to Levante’s half, with the front line routinely playing up to Levante’s box in an effort to win back possession. Nowhere is this more noticeable than with Messi’s defensive contributions: twice winning the ball back in Levante’s defensive third, one coming inside ten yards of the touchline. 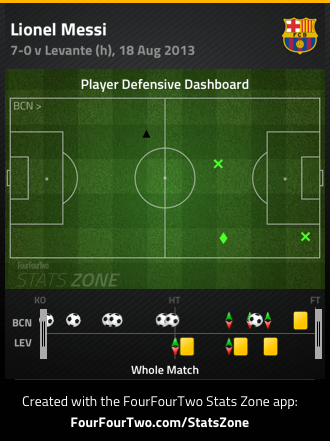 Difficult to quantify without extensive statistics across multiple seasons, Barcelona’s performance in Levante’s final third was rooted in an attacking mentality that hasn’t always been on display at Camp Nou. Players like Sanchez, Pedro, Adriano and Alves were not content with simply moving into wide spaces only to square safe passes back to Xavi and Busquets, but rather, they looked to attack the edges, getting past the fullbacks in effort to play more dangerous passes into the six yard box. Likewise, Xavi, Fábregas and Busquets weren’t content in playing slow, simple, sterile triangles and back passes in the middle and final thirds, opting instead to play more forward , risky and creative passes that continually released Messi and the wingers into Levante’s box. 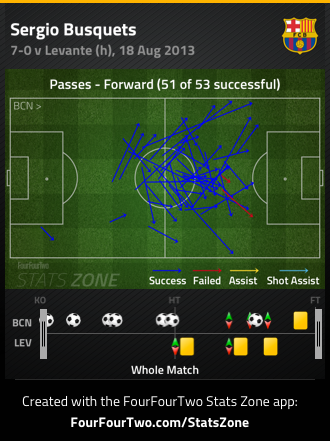 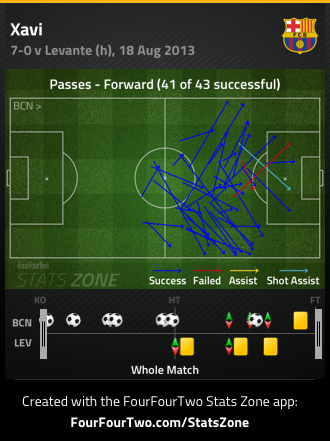 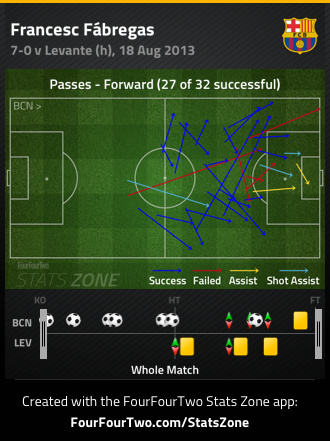 Admittedly, (due to his deeper position) Busquets is naturally going to complete more forward passes than those squared or back, but his success rate and average length per pass are impressive regardless. And as for Xavi and Fábregas, both play high enough up the pitch that there is a significantly smaller amount of space to pass forward into, yet they both completed more forward passes than those they squared or sent backward. The difference in this display with those in the more recent past, is the speed and direction of play; throughout the first half the midfielders were spraying passes about, quickly and mercilessly, laying siege to the Levante goal.

Wingers in the Wide Spaces:

Barcelona’s tiki-taka identity is rooted in a sort of "pass and move and pass again" philosophy – which is a truly wonderful ideology, provided there is available space to move into. Too often last year – often in a misguided attempt to fit Cesc into the starting XI, the Barcelona movement was suffocated by too many players in the same space, especially noticeable when Iniesta and Fábregas would drift into each other’s areas. By playing Pedro on the left and Alexis on the right, and starting Fábregas at the expense of Iniesta, Tata provided an entirely different approach to preserving (and thus exploiting) space in the final third and the middle of the pitch. Both players, and Pedro especially, like to play on the wing, running at fullbacks in effort to get to the byline. And this isn’t to say neither player cuts inside occasionally in an effort to beat his player or move into space, as both do have a tendency to do exactly that. But rather, it’s that neither player routinely drifts inside looking for pockets of space to sit in and receive the ball in the same way that Iniesta or Fábregas will when either of them are started on the wings. As a result, we consistently saw open and available space in the center of the pitch that Fábregas and Xavi (and Messi when he dropped deep) were able to find and exploit.

Since the signing of Neymar (and I suppose, the speculation leading up to it) people have wondered if and how Messi and Neymar can coexist. Unfortunately, this topic remains largely unanswered as Messi was subbed off just seven minutes after Neymar’s introduction. In those seven minutes though, we saw Neymar complete all five of his attempted passes, three from the wing (including one to Messi), one from the box and one from a central position. Did we learn anything definitive? Probably not, although I’m still inclined to believe that Neymar will settle brilliantly, exploiting the space and matchups on the wing, that will inevitably come by playing alongside Messi.