Barcelona's new man-marking system at set-pieces faces its first real test tonight against Atletico Madrid...the question is: will it work for the Blaugrana?

Prior to the start of the season, our very own resident statistical expert Benjamin Puglsey took an in-depth look at Barcelona’s set-piece defense and offense, comparing it to their opposition using figures from the 2012-2013 La Liga and UEFA Champions League season. For some, the results were a little surprising – Barcelona may concede great number of shots and chances from set-pieces, but broadly speaking, their defense isn’t that bad, at least for a team of their relative stature.

Without any figures to directly compare to, conclusions were admittedly hard to draw, but memory indicates that Real Madrid boasted a similar problem, despite their reputation as a more physical team.

However, new Barça coach Gerardo Martino didn’t necessarily need a comparison to make up his mind about Barcelona’s set-piece defense, opting to switch Tito Vilanova’s zonal marking strategy for a more old-fashioned, man-to-man approach. Without any significant tests in pre-season, it’s hard to tell whether this philosophy will work to Barça’s advantage – although one suspects that Diego Simeone and Atletico Madrid will at least provide the Blaugrana with a stern test tonight, in the first-leg of the Supercopa de España at the Vicente Calderon.

In their Jornada One victory over Sevilla, Atletico won themselves a staggering nine corner-kicks – and managed to convert that dominance into goals – or to be more accurate, a goal, from Diego Costa in the 35th minute.

All this against a Sevilla side with home advantage, and a far from "small" backline.

Just what sort of damage could they do in front of their home crowd, against a Barcelona back-line likely to include both the 5’9" Javier Mascherano and the 5’7" Jordi Alba?

This naturally is where Martino’s new system is supposed to come to our rescue – while Atleti are a physical side, they only really boast a few imposing options at set-pieces. Diego Costa, the two centre-halves and at a push, Mario Suarez; hardly a "Stoke-esque" line-up – which should enable the Blaugrana to defend this threat relatively easily.

That is provided that they don’t fall into the same trap as Sevilla. 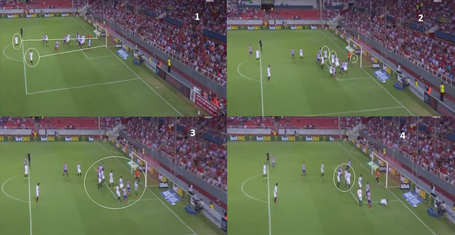 The picture above breaks Diego Costa’s goal down into four different pictures, each of which could be of importance to Barcelona and Gerardo Martino (or indeed, Rubi, provided he is still in charge of set-piece training).

In picture 1, the corner is being delivered into the danger area and the Sevilla defense appears to be well-prepared. Each player has picked up a member of the opposition to mark – but the two players on the edge of the area are just floating. Presumably, this would help Sevilla initiate a counter-attack if they could clear the ball – but do they really need two players to do that? What about one? What about one of the two, with the striker also back if necessary (including the two "floaters", there are nine Sevilla players in the vicinity of the area)?

Of course, hindsight is 20:20, but I personally would have opted to utilise these two players on either post – it creates the illusion that Sevilla have more players back and crucially, ready to defend the corner, than they really do, but above all else, it’s a get out of jail free card for the other defenders.

With two players on the post, maybe the corner wouldn’t have developed as it did – given Barça’s height, or lack thereof, I would strongly advise a presence on each post.

After all, as the corner floats into the area in picture 2, it’s clear for all to see that its intended target (Miranda) was at the near post.

Now, in this instance, the two circled players should be realising what it is that they need to do – Miranda faces a difficult task to get the header on target if he goes for goal, so in all likelihood, you need to take a gamble, and assume that it’s going to "flicked on" into the six-yard box. Therefore, the circled defender closest to the ball (who is seemingly covering a zone rather than a player) should be readying himself in order to compete for any loose ball, and the other circled player must keep an eye on his man, Diego Costa.

This doesn’t happen as instead the first circled player pushes out just a little, to the edge of the six-yard box, while the man-marker completely loses sight of Diego Costa – and the ball, which is free in the penalty area. Now, Sevilla’s defense is having to compete against a striker, hungry for goals.

And who is going to win that particular battle? The technically gifted, composed striker; or the stereotypically clumsy/slow defenders?

Picture 4 and the scoreline demonstrate that unsurprisingly, Diego Costa is the victor – and the ball is nestling in the back of the net. The keeper is helpless all throughout, while the three circled Sevilla defenders have criminally pushed forward towards the near post, leaving Costa time and space to finish at the far post. Perhaps a player on either post would have helped Sevilla recover – maybe block Costa’s goal-bound shot, or even push out to pressure him when the other defenders lost their bearings?

In an unfamiliar system, there’s every chance that a similar fate may await Barcelona – they could easily lose track of their man, and a split-second is all Atletico would need to capitalise. But look on the bright-side; this is the kind of test that you simply cannot replicate on the training ground.

What better to time to test a new strategy than early in the season?