Atlético 1 - Barça 1: A Lesson in Tactics

A look at Simeone's defensive 4-5-1 and an in-depth analysis of Atlético's brilliant counter.

Share All sharing options for: Atlético 1 - Barça 1: A Lesson in Tactics

An interesting match that proved to be. Atlético defended well, dropping quite deep, for most of the first half, content with ceding possession and hitting on the break -- which is exactly how they scored the opening goal (more on that in a bit). Meanwhile, Barcelona were unable to turn possession into meaningful attempts and halftime came with a surprise scoreline. Messi's substitution, a change which saw Fábregas move into the centre forward position, while forced by Messi's injury and was not necessarily tactical in nature, had very tangible tactical results. And eventually, the visitors found a way past Atlético's defense, as Neymar headed home for his first Barcelona goal. 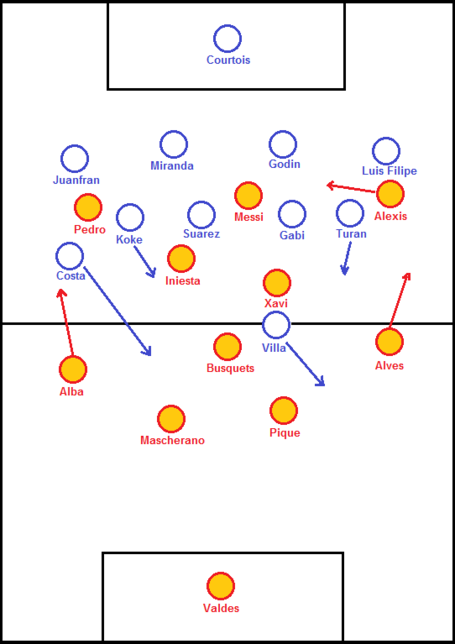 Simeone had his side dropping very deep to deny Barcelona any space in the final third (although this is not especially surprising as Barcelona see this in almost every match). Playing in a 4-4-2 going forward, the tactical nuance came in the way Atlético defended: with striker Diego Costa dropping off and to the right, Atlético defended in a 4-5-1 with Costa practically man-marking Jordi Alba. The result was an incredibly effective midfield four that could sit and swarm the ball when it was moved in the middle.

Because Costa defended so close to Alba when Barcelona were in possession, as soon as the ball was turned over it meant that Costa was still so close to Alba: the result? In an effort to quickly bypass Barcelona's high press, whichever Atlético player won the ball back, he immediately looked to play long balls to Costa who had a significant physical advantage against Alba (and also Mascherano). Villa’s presence on the top line also played a huge part, as he continually managed to hold the ball and allow Atlético’s midfielders (specifically Arda Turan and Koke to move forward). As this was Atlético’s primary tactic throughout the match and because each element described can be seen on display, I thought it might be beneficial to go still by still through Atlético’s opening goal.

Atlético's 4-5-1 and the Atlético break that leads to Villa's sensational volley: 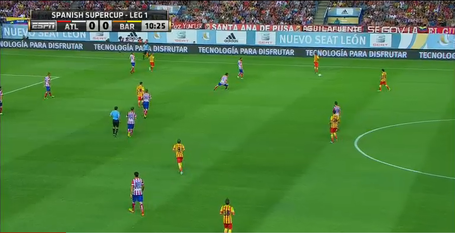 This was Atlético's defensive tactic for most, if not all of the match. From the top of the screen to the bottom is Turan, Gabi, Suárez, and Koke in a compact line, with Costa dropping significantly deeper than Villa in his attempt to track Alba -- which, as the ball is moved to the left side of the field we see Costa shadow Alba as he makes a run to the corner: 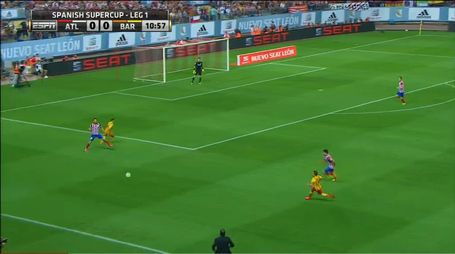 Again, this is the way Simeone instructed Costa to defend for the entirety of the match, effectively man-marking the left-back and disallowing him any positive influence for Barcelona going forward.

Atlético's goal comes on a lightning fast break that begins with Messi losing the ball amid a crowd of Atlético defenders (Godin, Gabi and Turan): 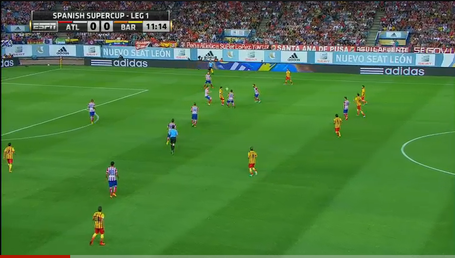 At this point, Costa has dropped all the way into the midfield line, making Villa the highest player on the pitch for the home side, effectively marked by Xavi, Busquets and Alves at this point.

This is the beginning of the Atlético move: Turan has gathered possession and is breaking forward, with Busquets applying the pressure, and Villa drifting into space behind Alves and Xavi. Turan moves with ball towards the space at the touchline and then works a pass into Villa, who -- like he managed all game long -- holds the ball in an effort to allow his teammates to move forward. 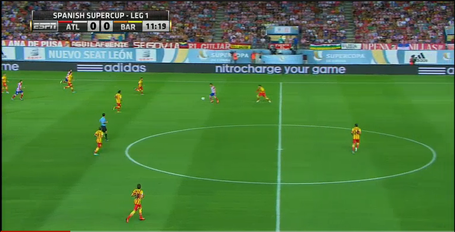 Once Villa collects the ball, Turan begins to sprint along the touchline, past Busquets and into space and this is where Barcelona begin to make mistakes. Instead of seeing Turan's run and moving towards the touchline, Alves (along with Xavi) moves towards Villa, who has already passed back to Gabi, who will play a one touch pass out the touchline for Turan: 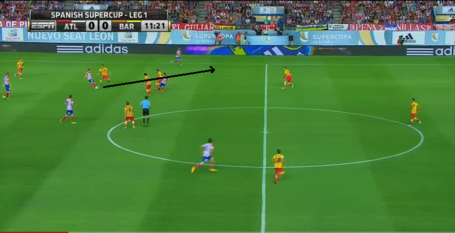 At this point in the move, Xavi and Alves are essentially useless as they are caught facing the ball while Turan and Villa begin to run away from them at pace. Pique's initial thought is to move towards the touchline and intercept Gabi's upcoming pass to Turan. The passing looks like this: Villa back to Gabi, Gabi to Turan, Turan to Villa, and Villa through the channel between Pique and Mascherano, releasing Turan into space. All in the span of four seconds (between 11:20 and 11:24). 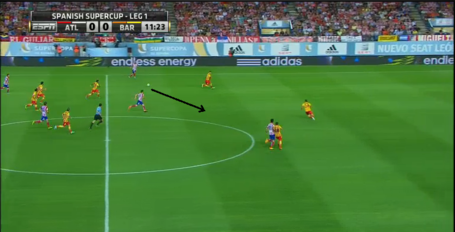 Having failed to deny Turan the ball or challenge the winger, Pique turns away from Turan to move back towards Villa in hopes of challenging the now-Atlético striker once he receives the ball. 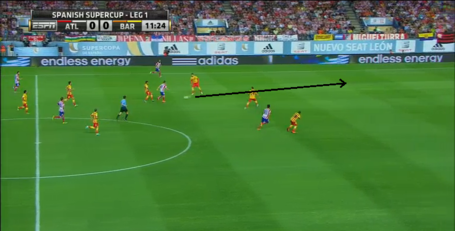 This entire move has happened in less than five seconds, covering thirty yards and made up of five perfectly placed one touch passes, yet even now, Barcelona aren't in a terrible position. Alba has tracked Costa the entire way and Mascherano correctly chooses to follow Villa's pass (and concequently Turan) down the touchline. The problem comes from Pique's run tracking back to his box. 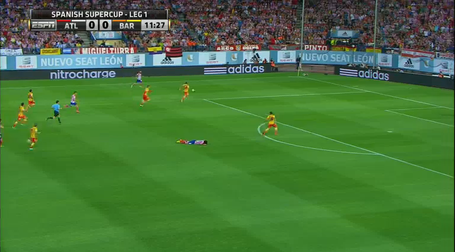 For whatever reason, Pique runs rather frantically back to his 18 yard box with no purpose other than to just get back, a problem simply because he has failed to pick up the only dangerous player -- he has clearly seen Mascherano cover him and take Turan (this is hardly an assumption because Masch has come across Pique's body in the direction he's moving) and at this point should be locating, and moving towards, Villa. Meanwhile, Alba and Costa came together (with Costa going to ground for absolutely no reason at all), yet Alba continues his run into the box, marking nobody at this point and taking himself completely out of the play. The next still is the same as the previous only with lines denoting each players' run. 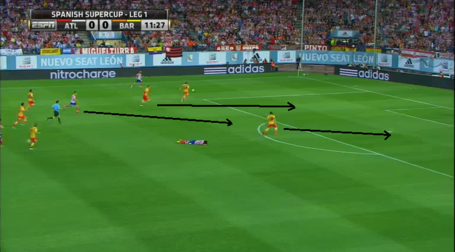 The problem for Barcelona at this point is that each arrow is parallel to the other. Pique has completely misunderstood Villa's run while Alba has failed to make the perpendicular run to cut Villa off. 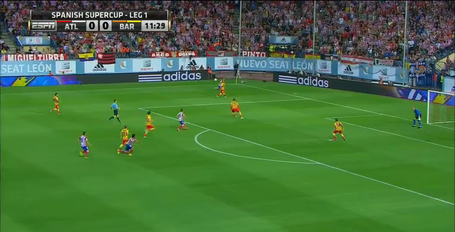 This is the moment just before Villa smashes home the volley. The space that Villa has found for himself here is unforgivable from the defenders' points of view. From the moment Atlético break, Pique begins his panic routine: he's lost in space during the initial passing triangle and as he turns to track back he fails to recognize Mascherano's movement. In truth, there's very little danger until about 11:25 when Pique chooses to sprint back in fear rather than track Villa all the way back to the edge of the box. As for Alba, he too has run to a spot rather than to a man, leaving Villa far to large an area with which to strike the ball.

What can be learned from this? Everything, really. As this goal lays the blueprint for beating Barcelona: Villa's initial hold-up play is brilliant, allowing the few seconds his teammates need to beat the Barcelona pressure, and from there the passing is superb and the finish is exceptional. Because we know the goal happens it's obviously easy to go back and nitpick each individual mistake (of which there weren't many, to be fair) and that's really the point here: one or two small changes can correct the errors that led to a rather magical goal. And as Barça will routinely be defending on the counter, the situation leading to the break will be encountered quite often -- better to fix it now, in the Supercopa de España, then later in a more meaningful event.