La Masia is overflowing with talent. While it's been a tradition to bring up homegrown talent, FC Barcelona looking to sign a few young, talented players from outside the Masia walls to continue the winning tradition in Catalunya.

Share All sharing options for: La Masia Looking to Bring in New Talent

FC Barcelona is known for developing young players into superstars. If there is a position that defies what La Masia has done over the years is manufacture midfielders. As we have seen so far in preseason action, it's looking like Sergi Roberto may become the next superstar in the making at midfield.

Looking to continue the tradition of midfielders growing at La Masia, FC Barcelona is closing in on signing two young mids to Barcelona B: Denis Suarez and Giorgian De Arrascaeta.

On the defensive side, Barcelona has already locked up a young, talented defender in Joan Campins.

Born in Salceda de Caselas in Galicia, Spain, 19-year-old Denis Suarez is an attacking midfielder who is currently at Manchester City. Sky Sports' Guillem Balague reported that a deal to bring Denis to Barcelona was "90% complete." Suarez joined Manchester City in 2011 from Celta B. Denis spent most of his youth career at Porriño Industrial. He was a member of Spain's U19 squad that won the 2012 U19 European Championship. He is currently part of Spain's U20 squad.

Some of Suarez's strengths include good speed, and a great ability to get out of tough spots when defended (a la Andres Iniesta type). Suarez is a great passer of the football, and his skills as a passer are far superior to most midfielders his age. Man City fans saw Suarez as David Silva's replacement one day. 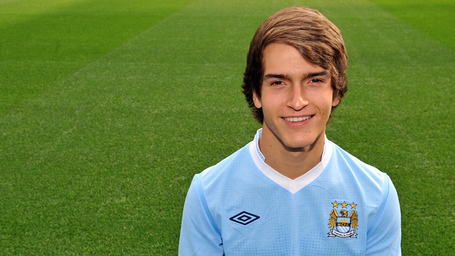 Suarez has some growing up to do on the pitch. He lacks focus during games at times. He also tends to get frustrated fairly quickly. But at 19, there's plenty of time for him to mature as a footballer.

Another attacking midfielder that is on Barcelona's radar is Giorgian De Arrascaeta from Defensor Sporting in Uruguay. The 19-year-old caught many club's attention during the recent FIFA U20 World Cup in Turkey, including CSKA Moscow.

Some of his strengths include tremendous dribbling skills as well and he's also good from set pieces. Despite playing in the U20 World Cup, De Arrascaeta still needs more experience playing big games. He lacks strength, and he needs to build up his conditioning (lacks physical stamina). 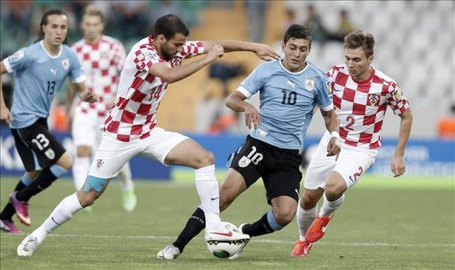 Last week, Daniel Jablonka, president of Defensor Sporting, told Uruguayan newspaper, 'El Observador' the talks are just at the beginning stages between his club and Barça. "Talks are only just starting. Negotiations will be held directly between the two clubs. Initially one of their scouts called us. He asked what the price tag was and we agreed that within hours we would talk to the Board. It is an honor for the player, for the institution, and whatever happens, the mere fact that a club like Barcelona is interested in Giorgian is a source of pride, whether it's for the first team or the B team."

Last week, FC Barcelona signed defender Joan Campins, formerly of RCD Mallorca II. Campins (18) is part of the Spanish U19 squad. According to multiple reports out of Spain, Campins recently rejected a move to Real Madrid Castilla in favor of waiting for FC Barcelona to come calling.

Joan mainly plays right-back, and his technical skills on the pitch are superb. He has great endurance; good speed, and is physically strong. No reports on any major weaknesses, but like any other young footballer, Joan needs more starts at the Segunda Division level. It is expected that Campins heads straight to Barcelona B, but don't be surprised if he starts at Juvenil A for El Blaugrana.

By the way, gracias Joan for retweeting me when I sent you a "Welcome to FC Barcelona" tweet. Much appreciated.

While Sandro Rosell and Andoni Zubizarreta need to make another big signing this summer on the defensive side, it looks like the club is not going to forget about making those one or two small, under-the-radar signings that could turn out to be mega steals in the future.

La Masia will always bring up tremendous talent, but it never hurts to reinforce it with talent from the outside to make Barca Juvenil A, Barcelona B, and eventually the first squad the best club in the world for years to come.