What next for Leo Messi?

This week started with Messi losing his Ballon d'Or crown to Cristiano Ronaldo, but it marks the seventh time the Argentine has been a finalist. So what's next for the little magician?

Share All sharing options for: What next for Leo Messi?

His first goal has to be to shake off all his niggling injuries and get back to the old Messi. Many players have spoken about how when returning from a long injury, you are often worried about picking up another injury or reaggravating the old one, so you don't play with the freedom you once had. Messi's two goals in his 30 minute comeback suggest he has no such fear but it would be understandable if he did. So for Messi to really feel free of injuries, he needs a good couple of injury free months where is an active, contributing member of the team.

It's also important for Tata Martino not to rush him back into playing too quickly. Obviously when you have the world's best player in your team, it is tempting to play him every game. But Messi, especially in the early stages of his comeback, will benefit from a rest in less important matches.

His next goal should be continuing to help Barcelona win trophies. Messi already has a trophy room that would dwarf most average sized apartments but he is still doubted by some as being one of the best ever. The competition that is most respected throughout club football is the Champions League. This very argument has been rallied against Cristiano Ronaldo when he comes to his candidacy for one of the best ever. The Barça number 10 already has three Champions League medals under his belt but at the age of 26, he's got to be wanting more.

To accomplish this will be no easy feat, especially with how strong Bayern Munich are looking with Pep Guardiola at the helm, but Barcelona go into every tournament one of the favourites. Couple that with an inform Leo Messi, it's hard to not see the Catalan giants winning another European title.

Another step which will no doubt come will be continue to break records. When Messi is at the peak of his powers, it seems every other touch of the ball that he has breaks record. The graphic below gives an idea of just how many records the Argentine has broken before the age of 30. 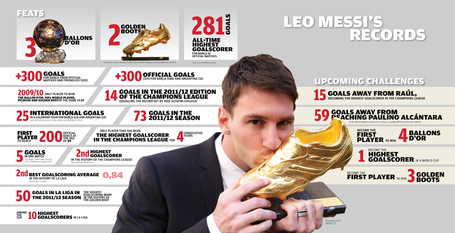 If Messi continues at this rate, it is likely that we will see every league and club record applicable to him, broken by him. Once again aiding his candidacy as the best ever.

The summer of 2014 is arguably one of the biggest in Messi's career. The Brazil World Cup is just around the corner and this competition is the main weapon when it comes to attacking Messi's claim as the best ever. Due to Spain's recent dominance, Messi has never won a World Cup and this has led critics to claim that the Argentine is no where near the level of Pele or his compatriot Maradona. While this argument is largely unfair, for Messi to really silence his critics he has to win a World Cup.

So what better opportunity then this summer. Argentina have one of the best attacking lineups at the competition, with Sergio Aguero, Gonzalo Higuain, Carlos Tevez and more. If they can produce a good defence to aid the offence, I'd expect to Argentina go very far in the competition. In rivals Brazil's territory and hitting peak age, the 2014 World Cup is a very good opportunity for Messi to finally win the biggest competition in the world.

Naturally if Messi achieves all of this he is likely to complete the next step, win the Ballon d'Or back from Ronaldo. Now it's clear the Ballon d'Or has turned into a bit of a soap opera but when looking back through the history of football, the title of best in the world is very important. Eras are often defined by trophies and there is no bigger individual accolade then the Ballon d'Or. So for Messi to solidify his claim as the best ever, he has to win the golden ball for a fifth time.

Lastly, his next step is big one. Become a leader at Barcelona. Messi is already a leader on the field because of the impact he has. But with the likes of Xavi, Carles Puyol and Victor Valdés either ageing or departing, Barcelona will start to lose some of it's charismatic leaders it has become accustomed to. This is where Messi steps in. I wouldn't find it surprising if in the future we had Messi as club captain and Cesc Fábregas as vice captain. So both players need to be ready for that increased expectation that comes with the arm band.

So that's what I see in Messi's future but it's always hard to predict just what will happen with phenomenon that is Leo Messi.