FC Barcelona host Malaga, trying to recapture the lead of the league which they have momentarily lost to Real Madrid. Can the Blaugrana snap a bad streak to reward its new president?

Barcelona enter this match in an unfamiliar position: second place. Thankfully for the Blaugrana, a win at home is enough to take them back to the summit. Malaga, however, will have something to say about the matter.

The Anchovies are still full of talented players, especially goalkeeper Willy Caballero, and they have a relatively strong defense. This year, Malaga have given up 24 goals, only 3 more than Real Madrid. But they are far off from their glory days with Manuel Pellegrini at the helm, where they were seconds away from eliminating Borussia Dortmund in the Champions League. Will the win prove straightforward for Barca?

Barcelona are in a bit of a flux as Sandro Rosell stepped down as president amid allegations of corruption. Josep Maria Bartomeu is the new president; will the boys back him with a win? Will the media frenzy be a distraction? Will they even care?

Besides the big change at the top, it's been relatively quiet for FC Barcelona. Dani Alves returns from suspension and should start at right-back. Carles Puyol is out after picking up an injury in midweek, in addition to Andres Iniesta, Alex Song, and Martin Montoya not recovering in time. Oier Olazabal, Neymar, and Jonathan Dos Santos are on the long-term injury list.

On the other hand, Ibrahim Afellay has made the match squad for the second time after his long injury lay-off. Is he still too unfit for even a spot on the bench? Cameroonian prodigy Jean Marie Dongou has also made the squad after making an appearance in the last league game.

Victor Valdes should start in goal as the undisputed #1 after coming back from injury. Gerard Pique and Javier Mascherano will be the two defenders in the middle, unless Tata Martino is convinced enough by Marc Bartra. Jordi Alba and Dani Alves will be the two fullbacks,Â even if the combo may lack balance.

With Song out, Sergio Busquets will start at pivote, with Cesc Fabregas taking up another spot in the middle of the park. Will Xavi start, having played a lot in the past two consecutive games? Since Iniesta, Song, and Dos Santos are out, Sergi Roberto is the only logical option.

Lionel Messi will surely relish the chance to build on an impressive cup game, in which he gave out his first assist hat trick. Pedro Rodriguez, Alexis Sanchez, and Cristian Tello will fight over the two wing spots, the latter buoyed by his first hat trick of his career.

By contrast, Malaga have few on the injured list. OnlyÂ Weligton is out injured, but it's a big loss for Malaga. He's been a force in the heart of defense despite his advanced age. On the other hand, they have no suspended players.

Caballero will start in goal, with Sergio Sanchez, Vitorino Antunes, and Jesus Gamez joining him in one of the Liga's stronger defenses. Flavio Ferreira is likely to take up Weligton's spot, unless Marcos Angeleri is preferred.

Fernando Tissone is almost a lock to start, with Sergi Dader and Ignacio Camacho taking up the other spot in the midfield two.

Eliseu should play on the left wing, with Duda taking up another spot in the attacking midfield. Samuel could be preferred on the right wing.Â Fransisco PortilloÂ and Pedro Morales are other options.

Upfront, Roque Santa Cruz should start. The Paraguayan veteran is the team's leading scorer in La Liga. Mounir El Hamdaoui, on loan from Fiorentina, is the other option.

A Messi-less Barcelona won a tight game thanks to a timely goal from Brazilian fullback Adriano.. 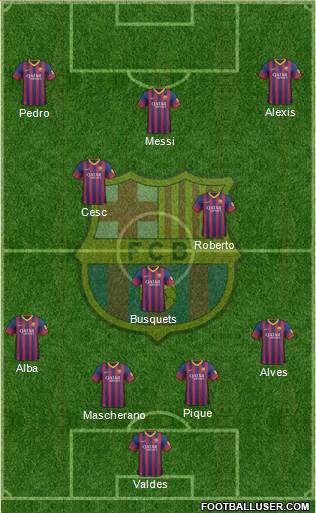 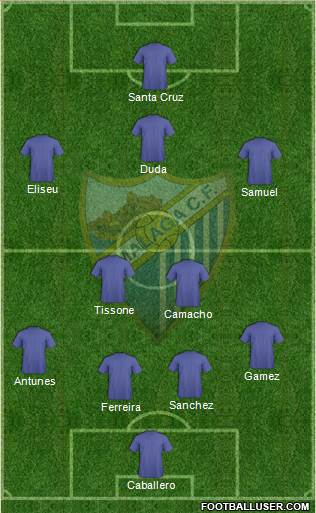 Malaga will be tough to break down with an organized defense and Caballero between the sticks. But it's tough to bet against Barcelona, even without Iniesta, Xavi and Neymar - as long as Messi is there. Prediction: Barcelona 2-0 Malaga