Luis Enrique has made an excellent start to life as Barça manager, but this frustrating defeat proved that he still has a lot of work to do.

The first defeat of the Luis Enrique era arrived in predictable fashion as the first top side FC Barcelona have faced this season exposed age-old flaws and took advantage of individual errors to win the match. It was a splendid team performance from Paris Saint-Germain but Barça gifted them victory through slack defending, nonsensical attacking moves and subpar pressing.

There was no real innovation from PSG manager Laurent Blanc: he simply took the defensive 4-3-3 set-up that has led Villarreal and Málaga to trouble Barça already this season and given the fact that his players are much better than theirs, it worked. Blaise Matuidi and Marco Verratti gave outstanding defensive midfield displays and Lucas Moura and Javier Pastore were constantly dangerous on the counter. In truth, though, they didn’t have to do much except stay strong and wait for Barça to bring about their own downfall, which they did promptly and charitably by making absurd and decisive mistakes at set pieces.

Perhaps that interpretation does PSG a disservice. Aside from a couple of lapses, they remained concentrated and committed throughout the match, always knowing when to press high and when to sit deep, frequently hassling Sergio Busquets, Dani Alves and Jordi Alba off the ball and, when they couldn’t do that, denying Lionel Messi, Neymar and Pedro any space in which to receive passes and attack. 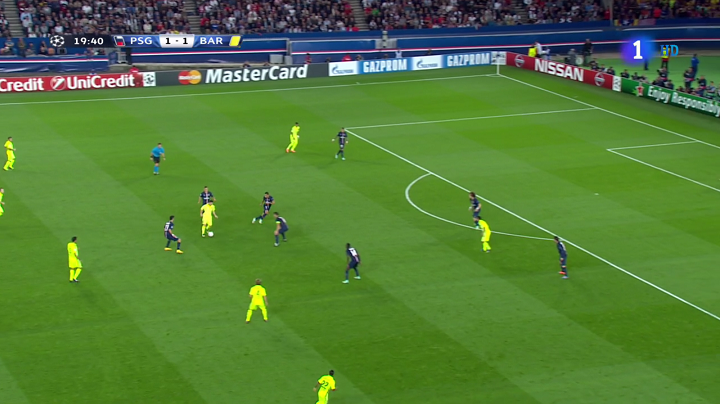 The majority of Barça’s attacks went down the right with Dani Alves, Ivan Rakitić, Lionel Messi and Pedro combining and trying to play their way through an amassed defence. Although an Alves cross created Neymar’s goal in the second half, this was the result of a PSG communication error more than pressure paying off: it was a simple high ball that Thiago Motta, Marco Verratti and Gregory Van der Wiel all misjudged, leaving Neymar to control and finish excellently. The only clear cut chance Barça deliberately created using that tactic came at 3-2 when Jordi Alba met Munir’s cross but saw his shot heroically blocked by Marquinhos.

By and large, Barça’s attacking tactics benefited the hosts. Time and again Alves and Pedro played themselves into dead ends and their teammates gave them no real attacking options. Jérémy Mathieu bypassed midfield a few times to supply Neymar to feet, but the Brazilian was always tightly marked and facing away from goal. Whatever Barça did, it was extremely easy for PSG to play against. 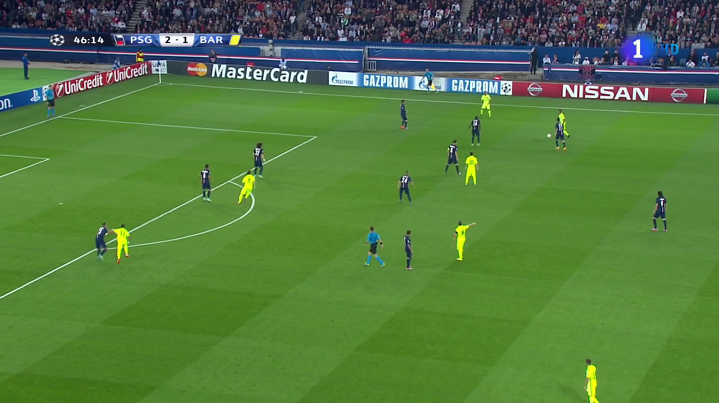 Barça’s impotence on their right flank was in stark contrast to PSG’s dominance when they attacked down theirs. Jordi Alba was constantly targeted, preventing him getting forward to support attacks and repeatedly finding himself two-versus-one. The winning goal was a case in point: Lucas, Pastore and Van der Wiel played a tidy triangle around Alba and the Dutch full-back crossed unopposed for Matuidi to score.

The fact that the passing move that led to that goal lasted nearly two minutes exposed Barça’s real problem in open play: they didn’t press at all well. Whereas PSG knew that to stop Busquets was essentially to stop Barça, Barça did next to nothing to prevent Thiago Motta setting the tempo on the other side. Consequently, Busquets was a liability and Motta was hugely influential, not only passing accurately and intelligently but also making 8 of his side’s 27 tackles and 4 of their 14 interceptions. 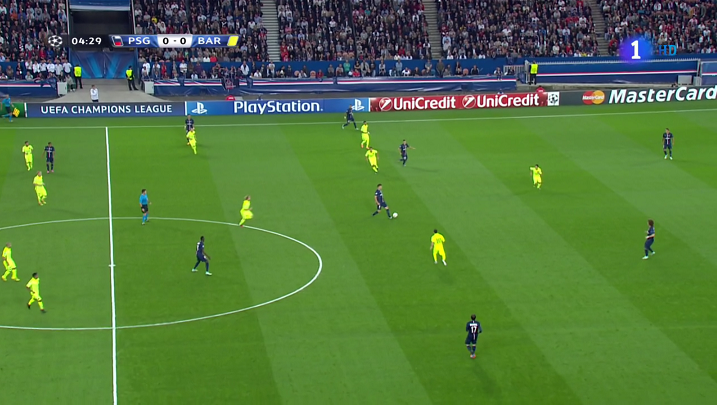 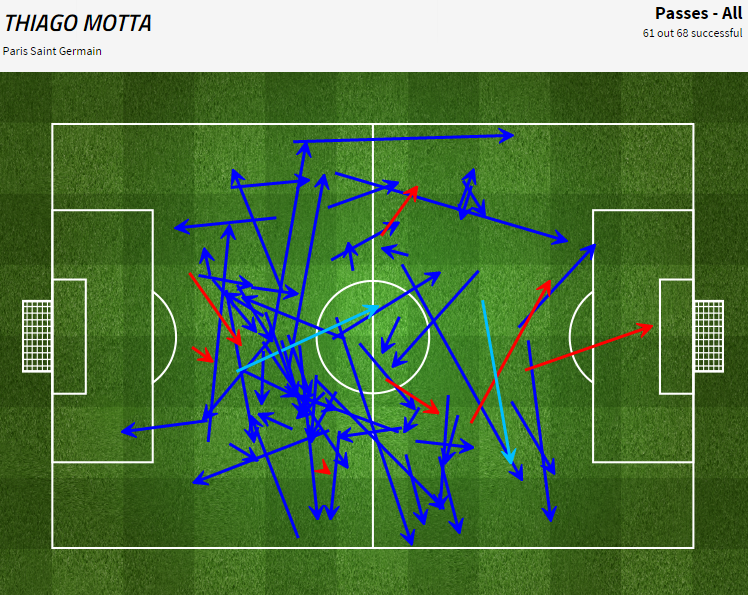 It was simply too easy for PSG to play out from the back and get the ball to the other end of the field. Everyone knows Barça struggle to defend set pieces, but the fact is that they wouldn’t have been conceding corners and free-kicks in dangerous areas if they had applied pressure with the same aggression that they did against Granada on Saturday.

Although Barça's pressing improved between the first and second PSG goals, but they didn’t force errors as well as the home side did – the corner that led to Verratti’s goal, for example, came from Lucas tackling Jordi Alba on the halfway line when the left-back had no good forward passing options. Lucas released Pastore, who won the set piece off Mathieu. The rest is history. 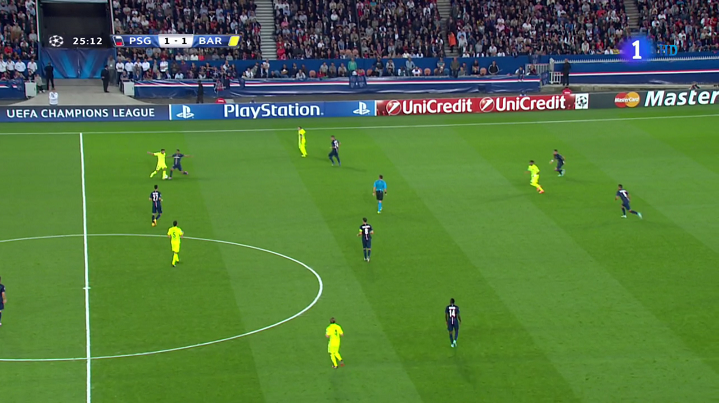 Besides an attack that was very easy to defend, foreseeable errors at set pieces and slack pressing that made it easy for PSG to build their own attacks, there were probably issues with the personnel right from the off.

Luis Enrique has understandably taken a lot of criticism for leaving Gerard Piqué out. It looks like the manager is rotating centre-back partnerships and with Piqué working his way back to fitness he decided to preserve the pairing of Javier Mascherano and Jérémy Mathieu. What he should have done – and what I suspect he will do in the future, now that he has lost a game like this – is play Piqué and Mascherano in the centre and Mathieu at left-back to give the side defensive solidity and height.

It’s not as simple as saying switching personnel is the answer, however. The real issue that led to goals is sloppy coaching and poor organisation on the training ground. For example, when Lucas Moura’s cross comes into the box for David Luiz’s goal, the only man it needs to beat is Jordi Alba, who stands a mere 1.70m in height. Of course, it clears him and arrives at David Luiz’s feet. Mascherano cannot overpower him and he scores. 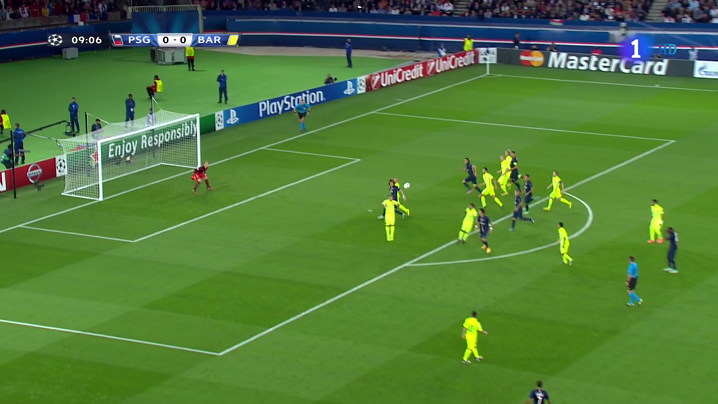 First of all, Alba should never be the first man. Most teams with a conventional number nine – one that is tall, powerful and all those other things Barça long since stopped believing in – use his height, strength and anticipation in these situations. Obviously, Barça don't have that option. The first man should be Busquets: he has the height to actually give the kicker an obstacle to clear.

In the event that the kick clears the first man, the centre-backs should really be marking the opposition’s taller players. In this instance, however, the marking is almost non-existent. Busquets, Mathieu and Rakitić are dropping to follow runners but they're watching the ball - Cavani has already lost them before the cross comes into the box.

It’s all so basic that it defies belief. In no universe should a team with Barça’s budget and available talent be trusted to fail to do the rudimentary elements of set-piece defending, but time and time again this situation develops and the best teams punish them.

If there were questionable selections, they were Alba, Pedro and Marc-André Ter Stegen – and while we’re here, the second-half substitutions of Rakitić and Alves also made very little sense. As mentioned above, Alba was stifled in attack and a liability at defensive set-plays. Pedro shouldn’t be playing for obvious reasons: he doesn’t suit the new system and seems incapable of pressing as well as Munir at the moment. One can see why Lucho would pick him based on experience but if that is his logic, Ter Stegen shouldn’t be playing.

The young German is much more popular than Claudio Bravo among Barça fans, but as talented as he is, he’s inexperienced and error-prone. When a goalkeeper is in that stage of his career, he should play in the low-pressure league games where he can make the inevitable errors and trust that they won’t be so costly. This was a hugely important game for Barça and the less spectacular but more experienced and trustworthy Bravo should have played, without a shadow of a doubt.

The match can be summed up in one sentence: PSG made life difficult for Barça, while Barça made life easy for PSG. The fact that there was only one goal between the sides only serves to flatter Luis Enrique’s men. While it’s unreasonable to call time on Barça’s time as a potential Champions League winner – especially as Luis Suárez could yet come in and change everything – the manager certainly has a lot to work on if they are to avoid defeats like this in the future.