Barcelona go in with a two goal advantage but little momentum. Can the English side capitalize at the Camp Nou?

The mood in Catalonia is somber. Barcelona looked tired and disinterested as they limped to another away defeat, this time against lowly Real Valladolid. "We lose a game and it's like someone died," Alexis Sanchez said.

Some say it's their chance for the league that has given its last breath. Now four points - 2 games - behind Real Madrid, Barca don't control their own destiny anymore.

Still, Javier Mascherano has a point. "At the start of the season, you hope to be in this position," he said. "We have a chance in 3 competitions. Now, it's the moment to push the accelerator"

Shifting gears, this is an ideal match to regain momentum and then turn on the style for the rest of the Liga - including the all-important Clasico match, which draws nearer.

First, the bad news: Andres Iniesta's wife had a miscarriage, which is why the footballer missed the previous game. Our thoughts are with the Iniesta family. It's unclear if Iniesta is up for this match physically or mentally - no one would blame him if he sat this one out. However, he has been called up and could start.

There were fears that Gerard Pique, who had to be subbed off in the loss to Valladolid, had suffered an injury relapse, but further tests showed no such relapse occurred and could start.

Jose Manuel Pinto has recovered from back problems and will be the substitute keeper.

The big news is that Sergio Aguero, arguably City's best attacker, has returned to the squad having missed the first leg due to injury. City need at least two goals and having such a weapon will be a great boost.

Martin Demichelis, whom many faulted (perhaps unfairly) for City's defeat in the first leg, is suspended having picked up a red card for a last-man challenge on Lionel Messi. Manuel Pellegrini, who launched into an uncharacteristic tirade about refereeing after that match, will be serving a touchline ban.

The first leg of this affair saw Barcelona with an early dominance but with City weathering the storm. Demichelis's foul from behind on Messi resulted in Messi scoring Barca's first from the penalty spot and City playing with 10 men. Dani Alves extended the advantage with a late goal. 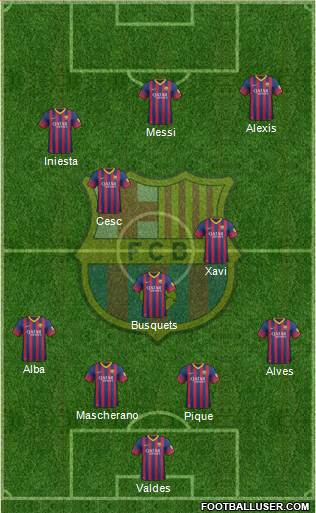 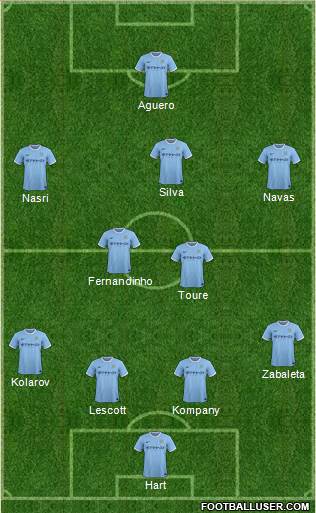 It will be a tight contest with two big teams, both with much to prove. In the end, Barcelona have the advantage and could use it to kill the game via possession, but their defense has had its question marks. The door remains open for City to pull off the comeback.
Barcelona 1-1 Manchester City