A Statistical Look Into Who Should Start El Clásico

One of the most important El Clásicos in recent years is on the horizon, so who should start for Barça? Let’s have a look at the statistics.

Share All sharing options for: A Statistical Look Into Who Should Start El Clásico

We'll start with the attack. The first league Clásico of this season produced one of Neymar's best performances in a Barça shirt but his form has taken a serious dip as of late and there is now a legitimate argument that the Brazilian should be benched. The chart below shows the total goals scored in the past five games of all the attackers. 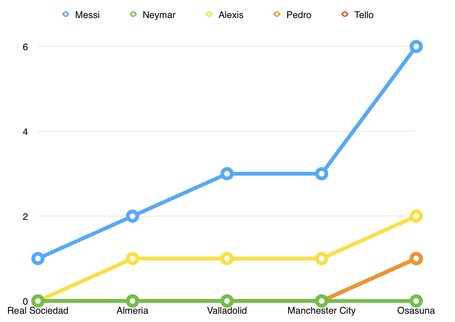 While it's no surprise Messi is way ahead, it is a little worrying to see Neymar has failed to find the net in the pass five games. If you compare this to each player's goal per game ratio in the league, as seen in the chart below, again the Brazilian is lagging behind. 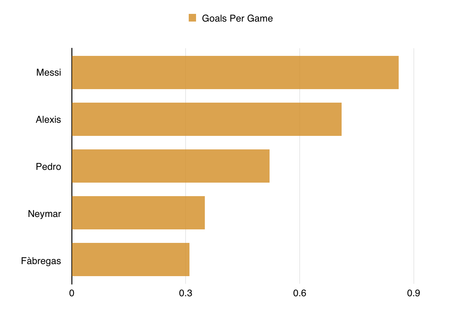 Interestingly, Fàbregas has a similar goals to game ratio which is respectable given that he is more naturally a midfielder. Of course this can all be explained as this being Neymar's first season in European football, meaning it's unlikely he would be at his best from day one. Also the court case that led to Sandro Rosell's resignation has got to have some affect on him. So I think it is quite possible we will see a front three of Pedro, Messi and Alexis as Tata Martino can't afford to take a risk with Neymar.

Next we'll go to the midfield and in particular the attacking midfielders. Martino really has a choice between three: Cesc Fàbregas, Xavi Hernández and Andrés Iniesta. Fàbregas started the season as first choice for Martino but Iniesta has slowly made his way back into the team and has produced some brilliant football. In a game like Madrid, Barcelona desperately need control of the game so that they can dictate the play. This means they can force their own style and not be bullied by the opposition. Therefore retaining the ball is of massive importance. 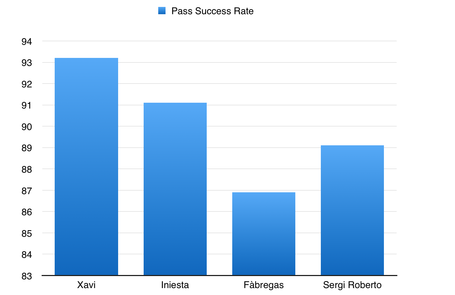 This chart shows each player's pass success rate for every league game this season. Like Messi having the the best goalscoring form, it is no surprise to see Xavi comes out on top. His passing is renown for being pinpoint accurate so it would seem he would be an obvious starter for Martino. At the start of the season, I would have predicted that Fàbregas would have started alongside Xavi but now Iniesta is the clear starter. 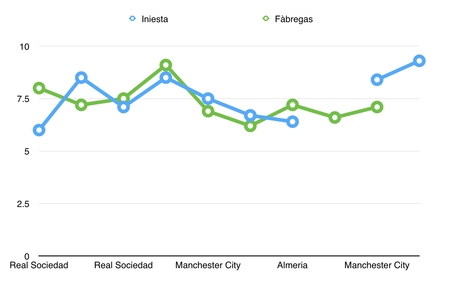 According to whoscored.com In the past ten games, Fàbregas and Iniesta have been receiving ratings that are similar. But in the past two games, Iniesta has really picked it up and is now reaching performance levels that are incredibly high. Which is exactly why Iniesta should start ahead of Fàbregas as he is going into the game in a great run of form and that could be what decides this game. Saying that though, I wouldn't be surprised if Martino included Fàbregas as part of the front three.

Next we will move onto the defence, which will be another big factor. Gerard Piqué should be fit for the match after missing the Osasuna game with an ankle injury meaning Tata Martino has a near fully fit defence to choose from. 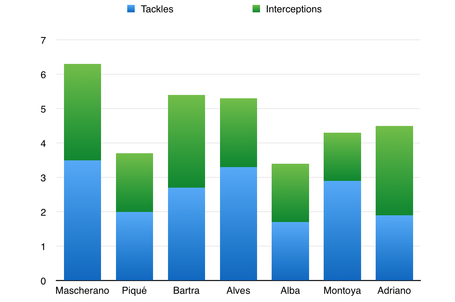 In terms of tackles and interceptions made per game, Mascherano leads the pack. Perhaps slightly worryingly is Gerard Piqué's relatively low averages. All three of Alves, Adriano and Montoya have higher, which is impressive for full-backs.

Although if we look at the height comparisons of Barça's defence... 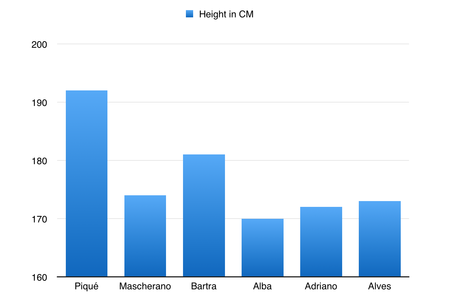 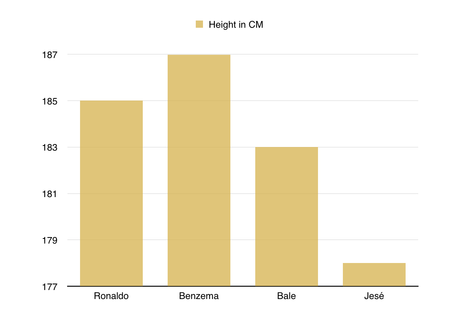 It is clear that Piqué adds some much needed height, so I believe it is quite likely that he will start.

So that's how the statistics look. Finally if you picked the team purely based on form, again taken from whoscored.com, this would be your outcome: 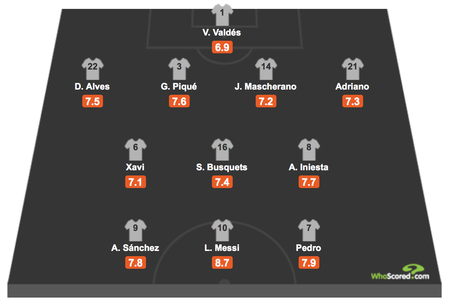 Personally, I'd go for this line-up: 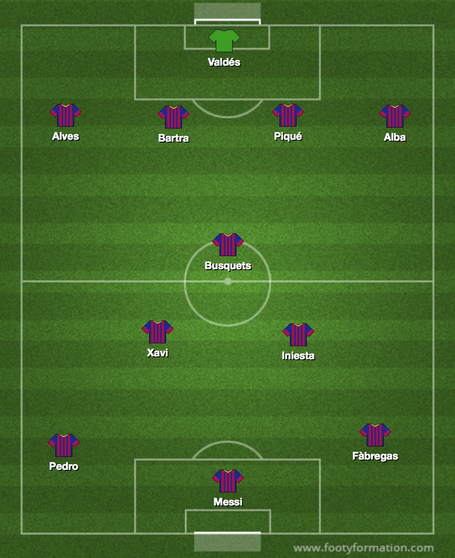