Real Madrid vs. Barcelona: A Look at the Controversial Refereeing Moments of El Clasico

It was a wild, wild night filled with goals and drama. But, a lot of the focus has been shifted to the refereeing controversies. So, how did the key decisions shake up?

Share All sharing options for: Real Madrid vs. Barcelona: A Look at the Controversial Refereeing Moments of El Clasico

"Since I've been here, Madrid have never benefited from the referee." -Cristiano Ronaldo.

This was a game packed with big decisions. While Undiano Mallenco, the referee, was hardly faultless, few could say he was afraid of making the big calls.

While Real Madrid - especially Sergio Ramos and Ronaldo - were livid due to the refereeing decisions, going so far as to make farcical statements like the one above, were they right to be that upset? (In fairness, their coach, Carlo Ancelotti said they did not lose because of the referee)

Let's find out, shall we?

It didn't take long for Real Madrid to start complaining. Cristiano Ronaldo went down on the edge of the box just three minutes into the match. While some wanted a penalty, it's clear referee Undiano Mallenco got this one right. Javier Mascherano's timing was perfect as he poked the ball away.

Ronaldo went down on the left side of the box not five minutes later. However, he seemed to have an even weaker case. Simply, Ronaldo backed into Daniel Alves while waiting for a long ball, then threw himself to the ground. It's one of those situations where you could say "there was contact", but if a player who fell over after being touched in the box won a penalty, there's no reason why every player should not throw himself down every single time.

It was Neymar's turn to create two moments of controversy. First, a Pepe tackle on Neymar in the box could have been a penalty. It's a bit hard to tell, but it seems that Pepe did actually get the ball - barely. To his credit, Neymar did not seem rushed to appeal for the penalty.

Right Decision (though a close call)

Neymar missed his best chance at goal, but was it due to a handball? There weren't too many good angles, but it's possible that Marcelo stopped Neymar's shot with his resting hand as he slid. Neymar again did not seem to interested in appealing. In reality, even if the ball hit Marcelo's hand it would be a bit crazy to award a penalty. After all, it was ball-to-hand and the hand was not in an unnatural position.

Here it gets spicy. After Lionel Messi leveled the scores at 2-2, Cesc Fabregas ran to pick the ball up from the net. He ran into Pepe's side, not violently, and it's hard to tell really who was at fault for the contact. Regardless, Pepe got in Cesc's face and began saying some words which probably were not "lovely night out, innit?" Pepe then proceeded to headbutt Cesc, lightly, I suppose, and immediately go down, clutching his face. Both players then went to ground, somewhat exaggeratedly.

Mallenco handed out yellow cards to both, which is fair enough.

In the mixup, Sergio Busquets's boot seemed to come into contact with Pepe's face. While no one really seemed to notice in live time, after the game, some zoomed in pictures surfaced seeming to show Busquets stamping on Pepe's face. However, video replays show that Busquets only grazes Pepe's face, and possibly unintentionally. It probably wasn't pleasant, but given how theatrically Pepe acted before, it's hard to imagine he would have let something too painful go by without a proper tantrum. Of course, if Busquets really stamped on Pepe's face with the intention to hurt him, then it's a red card and a ban. But, I doubt that really was the case. Busquets received no punishment

As strange as it may sound. Mallenco got all the decisions right as far as I'm concerned in the first half. That was about to change. Gareth Bale played in Benzema, who was on a hat trick. Unfortunately for him, Victor Valdes was on hand to make a great 1-on-1 save. But, Benzema should never have had the chance. The replay showed he was quite clearly offside.

Here is where I'd like to be a bit philosophical. Why is that refereeing decisions that are undone by good or poor play not as important? In other words - had Benzema scored, would that have shown a greater referee bias towards Madrid? In my opinion, no. The fact that he was given such a great chance to score is just as bad whether Benzema takes it or not.

Cristiano Ronaldo dribbled into the box, and Daniel Alves tripped him outside of the box. Mallenco gave a penalty. It's pretty obvious on the replay that while it was a foul, it was definitely not a penalty. Some compared it to Martin Demichelis's penalty foul on Lionel Messi, when Barcelona played Manchester City.

Two things: one, this wasn't the same. There was some argument as to whether Demichelis's actual contact was inside or outside the box (as former England international Warren Barton told this site, "Demichelis started the slide outside the box, but when he actually touched him, it was in the box.") Some even mentioned the continuation of the foul into the box as possible justification for a penalty.

Neither was the case here - the foul was all outside. Ronaldo just happened to fall inside.

While it was definitely not a penalty, there was certainly an argument that it could be a red card against Alves for a last man foul. Mallenco decided not to give one, and while it was a 50/50 call, I agree with the decision. Gerard Pique and Sergio Busquets were at least level with Ronaldo. Yes, Barcelona were in big trouble with Ronaldo rampaging into the box. But was it a last-man foul? It literally was not.

Right Decision (but it was close)

Technically speaking, you're not supposed to step into the box until the player has kicked the penalty. Technically. And by that measure, Benzema broke the rules and you should have had a re-kick of the penalty. Benzema broke this rule, not extremely flagrantly, but obviously enough. Still, 95% of the time, referees don't bother with this rule.

Probably the most difficult call. Was Neymar in an offside position when he received a through ball from Lionel Messi?

Considering arms are not counted when calculating offside, and that if an attacker is level to the defender, it is not offside, and the linesmen is meant to side with the attacker when in doubt, I think no offside call is correct.

However, it is very close. Still, in these situations sometimes when you can't tell, you have to go with the ref's judgement.

"I Didn't Touch Him"

That's what Sergio Ramos claimed post-game. Except he totally did. And while it was soft, it was enough to trip Neymar. On the other hand, Tata Martino, the Barcelona coach, said it was the most obvious penalty from his point of view. 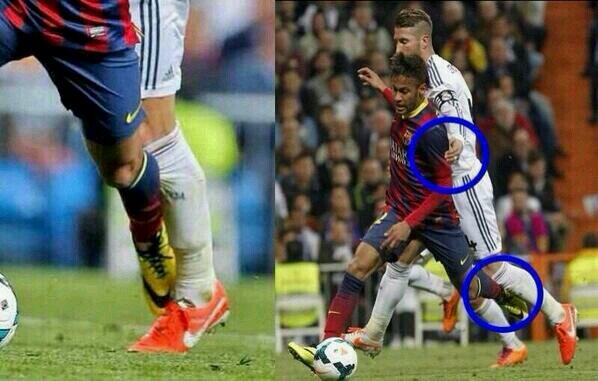 It was quite soft, but the idea that Ramos did not touch Neymar carries no weight.

Right Decision - but again it was pretty darn close

A foul from behind with the goal at his mercy. You can argue every call, but it's a fairly textbook denial of a goalscoring opportunity to me. The red card was merited.

Of all the penalties, this, to me, was the clearest. Andres Iniesta used his trickery to slip past Daniel Carvajal, and Xabi Alonso came in late, not touching the ball, and instead kicking Iniesta. It was not a hard foul, but it was a foul nonetheless.

The reality is that the losing team will voice their complaints more loudly. The winning team will be too busy celebrating.

Here's a few points of contention brought up by the community. First, Gerard Pique's alleged handball.

Ronaldo took a free kick which he blasted into the wall. Pique, while jumping, blocked the shot with his arm.

Unfortunately I could not find decent video for this incident. However, it seemed that while the ball did strike Pique's arm, it was in a natural position and it was certainly ball-to-hand, as the ball was struck with power from very close range.

Right Decision - and thanks to slipstreamous

Ronaldo delivered a tough elbow to Mascherano while contesting an aerial ball late in the game. Ronaldo was given a yellow card for the foul. If you watch closely at the beginning of the gif, Ronaldo glances at Mascherano. One could interpret that as proof that Ronaldo was intentional in his actions. If that's the case, he should have been sent off.

However, the glance is so quick it's hard to tell conclusively. I'm sure he would say he say he did not mean for that elbow to catch Mascherano's face. The question is, was the yellow enough? Hard to say, but again, I'll go with the ref's judgement.

Right Decision - though 50/50 - and thanks to Richzorz