"We have 19 finals ahead of us." That's how Cesc Fabregas describes every remaining game this season.

With the Liga race in a near-dead heat, even one slip could prove fatal. Barcelona trail Real Madrid by a single point, with Atletico Madrid lurking three points away from the top.

Barcelona travel to the region of Castile and Leon, where they will face a rather desperate Real Valladolid. The Pucela come into the match in the relegation zone and will need to scrap points if they intend on staying up.

During the week, we saw Barcelona playersÂ travelling all over to represent their countries. Will the extra jetlag wear on them? Or will their vastly superior technique secure 3 points?

Victor ValdÃ©s, Jordi Alba, Sergio Busquets, Cesc FÃ bregas, Xavi HernÃ¡ndez, AndrÃ©s Iniesta and Pedro all joined the Spanish national team, who won 1-0 over Italy. Xavi was rested due to illness, but he might be recovered in time to pull the strings for Barca.

Lionel Messi was seen looking a bit sick in Argentina's draw with Romania. While it didn't look too serious, it may be enough to put him on the bench for this one. On the other hand, Martino may feel more secure with the main man heading the attack. His compatriot, Javier Mascherano, played the full 90 but should be fine.

Neymar was in vintage form for Brazil, securing a hat trick and the smiles of a young pitch invader. Dani Alves also featured. Both would want to continue their winning streak.

Alexis Sanchez helped an inspired Chile side that nevertheless succumbed to Germany 1-0. Alexis has proved vital this season, so Martino may opt for a spot on the teamsheet for him. Although, Pedro scored in midweek, so will Martino start him as well?

Sergi Roberto was also in action, with the Spanish U21s. He probably will have a spot on the bench - could he even start?

On another front, Carles Puyol announced his decision to leave Barca at the end of the season. Puyol made his debut against Valladolid many years ago, and also scored his first goal against that same team. Will he play against them one last time? Sadly, no, as he has been left out of the match squad due to injury.

Gerard Pique is in doubt due to an injury that kept him out of the international matches, but he did make the match squad. Otherwise, Marc Bartra would start in his place.

Jonathan Dos Santos continues to be out with a long-term injury, but should be back come April.Â Unlucky Isaac Cuenca is hurt yet again. Jose Manuel Pinto has not recovered yet from a back injury and is not part of the squad.

Andres Iniesta was originally part of the squad but had to be left out due to "personal reasons." Ibrahim Afellay replaces him.

Jordi Alba and Alex Song have also stayed home. Song featured in a rather lifeless Cameroon side that lost heavily to Portugal. He may have picked up an injury in the process - it's hard to think he's being rested for the match against Manchester City.

Otherwise, Tata Martino will have most of his squad ready and it will mostly be a matter of whom he will rest, bearing in mind the international break and the upcoming Champions League clash.

In many ways, it will be like the match against Rayo Vallecano - a relegation opponent before the big European date. But will the result be the same?

Valladolid are a lot tidier at theÂ JosÃ© Zorrilla Stadium, conceding 14 goals in 12 games, compared to 30 in 14 away from home. They'll need that form if they want to have any chance of getting a few precious points out of this game.

Jeffren Suarez, known in Barcelona for scoring goal number 5 in the famous 5-0 "Manita" victory over Real Madrid, will miss his return home due to injury.

Midfielder Victor Perez and little-used Swiss-Dominican defender Heinz BarmettlerÂ are still facing niggling injuries and have not been called up.

Interestingly, Omar Ramos, who is used to starting, is out of the squad due to a technical decision.

Javi Guerra is the key man in attack for Valladolid, scoring 12 goals in the league so far. Carlos PeÃ±a, the starting left-back, is unafraid of getting to the overlap and has provided 3 assists.

Javi Guerra got Valladolid to an unlikely early lead, but they could not sustain it as Alexis Sanchez equalized. Xavi completed the comeback, before Alexis and Neymar turned it into a comfortable scoreline. 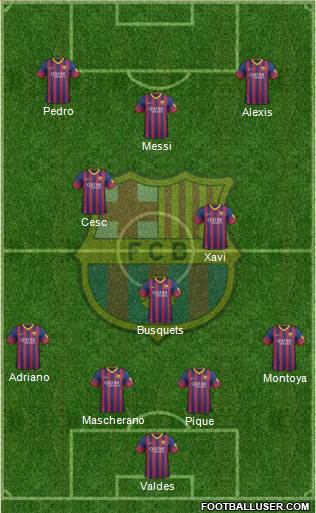 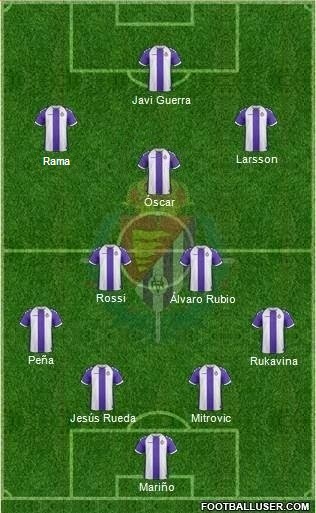 It could prove a tricky match sandwiched in between the international break and a Champions League game... But Barcelona should still have enough quality to see off a team stuck in the basement.