Barcelona's season is almost done. Neymar's season is already done. What if we take a look back at what he did? Was he the Neymar we expected? Can we trust him for the future?

Monday, June 3rd, 2013. As fans and journalists walked into Camp Nou, the feeling amongst everybody was that this was a special day in FC Barcelona history. After years of offer after offer and speculation after speculation, Barça finally did it. They got a Brazilian superstar, a scoring machine with unbelievable talent and polarizing personality. A 22 year-old kid with the brightest future ahead of him. A guy wanted by everybody, but who chose the team he grew up loving and admiring as he was scoring his first goals back in Santos. Neymar Jr. was the future - and perhaps, the present.

His first game was in Madrid. Spanish Super Cup, against Atlético. Barcelona was losing by one goal and started to figure out it was not going to be easy to score against Diego Simeone's defense. Neymar was subbed in for Pedro in the 59th minute. It didn't take long for the Brazilian to leave his first mark. Seven minutes later, a cross by Dani Alves found Neymar's head. The game-tying goal. The impression this was not going to be the only one.

Fast forward eleven months and here we are, almost at the end of a sad season. The Champions League is gone. The 2-1 loss to Real Madrid at the Copa Del Rey Final still hurts - I'm still trying to figure out how can Bale run that damn fast - and the chances of winning La Liga are really small. So, it's maybe time to reflect upon this season and what the players did. Let's talk about Neymar. Did he live up to the expectations? Did he play the way we thought he would? If not, why?

Neymar played a total of 40 games (25 League, 10 UCL, 3 Copa Del Rey, 2 Super Cup), scoring a total of 15 goals (9 League, 4 UCL, 1 Copa Del Rey, 1 Super Cup). He started 32 of those 40 games, most of them playing his favorite position: left forward. He had a superb start, with 10 goals and 10 assists in his first 22 matches. The 6-1 UCL win against Celtic saw Neymar at his best: he was directly involved in four of the six goals, with an assist and his first and only hat-trick as a Blaugrana. He also had a great performance against Real Madrid, scoring and assisting in his very first El Clásico.

Now, it's very important to mention that Neymar's best tenure this season happened in the two months Lionel Messi missed because of injury. Now we could interpret it in two ways. First, the narrative that says Neymar and Messi can't play together and Messi's absence gave Neymar the freedom to play the way he did at Santos and the way he does in Brazil: coming from left to center, playing free, not commited to one single position and with the freedom to strike or pass whenever he wants. Second, we can look at it in the positive way: it was clear during Messi's absence that the Brazilian is ready to be the star, the best player and a leader on and off the pitch. Xavi, Andrés, Cesc, Alexis and others looked to give him the ball and the spotlight to see if he could be Leo. And he delivered. Until January 15, Neymar was not only the future. He was the present. 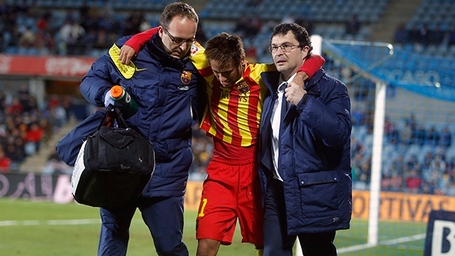 January 15, Copa Del Rey, against Getafe. It was Messi's third game back, and he was looking like the Messi we know. And most importantly, he and Neymar were doing great together. Then came the 28th minute, when Neymar tried a pass close to the goal-line when he twisted his right ankle in a very ugly way. That seemed serious. He was immediately subbed off and taken to the hospital for exams. A lot of people thought the World Cup was in jeopardy, but the drama ended quickly, as Barcelona announced that he was only going to be out for a month. Even though it wasn't as bad as it looked, it was Neymar's first major injury as a football player. The rehab went as expected and, a month later, he was back. But it didn't look like Neymar out there. For some reason, he wasn't himself, cleary trying to get back on track and be the same again. Unfortunately, that happened in the same time Barça also didn't look like Barça out there. The team had lost three of its last six League Games, blowing a huge lead and seeing Real Madrid and Atlético get back on the title picture.

Then, things got bad for Neymar. Trying to do something to improve the team, Tata Martino changed the scheme, bringing in Cesc Fàbregas and moving Neymar to the right side, with Iniesta playing at the left and Alexis on the bench. It worked twice in the UCL Round of 16 against Manchester City and in the amazing 4-3 win against Real in Bernabéu, a win that brought Barça back to title contention. But the Brazilian was highly criticized for his performances. He had almost no impact whatsoever in any of those games - yes, he suffered that penalty against Madrid, that in some way changed the match. But, come on, that's it?

Then Neymar was brought back to the left side against Celta, in his last good performance of this season. He scored twice and was celebrated by the Camp Nou crowd.

Tata decided to come back with Cesc in the middle and Neymar on the right. He scored in the first leg of the UCL quarterfinal. But then, Barça lost to Atlético and Real Madrid in a span of 10 days.

You see the problem here? Neymar was spectacular until his injury. He played really well against Celta and scored in the first leg against Atlético... playing LEFT! L-E-F-T! Izquierda! That's clearly his best position and where he should be playing from the start. Cesc was close to terrible in all the games he played in this scheme. It's not comfortable. For anybody. Especially for Neymar.

All things considered, Neymar's first season at Barcelona was a B. It can't be higher than that because he indeed has had bad games (he played horrible against Real Madrid and Granada) even playing out of position. But it also can't be lower than that because of his first four months (especially the way he played when Messi was not around) and the two injuries (he's currently out of action because of a foot contusion) he had for the first time in his life.

Neymar is a star. He is Brazil's only hope to win the World Cup in its own country. He already proved that he can play lights out when the situation calls for it. He had his problems and, granted, it wasn't quite the right time to come to a new team. Barça has deep issues that need attention. Barcelona also needs a manager that can understand Neymar and figure out how he can play in a collective way while still showing the world his individual talent.