Thank You, Barcelona. Thank you, Football

Even thought it hurts, we are lucky to be a part of what happened this Saturday, in the Liga final between Barcelona and Atlético

Share All sharing options for: Thank You, Barcelona. Thank you, Football

When I heard the final whistle on the Camp Nou, I immediately took to Twitter and did what I should have done: congratulated Atlético Madrid on winning the title. I said they deserved it, that Barcelona wasted its opportunities and Atleti played a hundred percent every single time they entered a football pitch, and because of that, they should have won the championship they were celebrating as the Barcelona crowd applauded the visitors.

After that, I switched over to the FA Cup final between Arsenal and Hull City. It was a lot of fun, and I laughed out loud when I finally saw Arsenal actually win something. It was awesome to see them relieved after winning a title they also deserved. Then, it was time to watch the German Cup final between Bayern München and Borussia Dormtund. Another great one, two sensational teams playing their style and delivering more fun and excitement. Bayern wound up as champions, and I was happy to see Pep Guardiola winning once again.

Then, I switched over to a debate show and saw them talk about the Brazilian league, discuss referee mistakes and show the highlights of Saturday's matches. After a break, they came back with the highlights of Barça-Atleti, and after watching Alexis and Godín goals all over again, I finally started to reflect on what happened a few hours ago. It was the first time I really began to think about what I felt watching that game.

Now it hurts. A lot.

It still hurts. What happened last Saturday evening is not just painful, it's depressing. As a Barcelona fan, you still believed. Especially after seeing all the craziest things we thought would never happen actually happen in front of our eyes, we really expected Barcelona to win La Liga in the midst of a tough, yet undeniable, end of an era. We thought we could have one single reason to celebrate a disaster season. It was taken away. By the team that took away almost everything from Barça this year.

Atlético played the perfect game. The colchoneros knew it would be hard not to allow goals. In a game like this, Barça would try everything, and the defense would eventually break sometime. Alexis scored for Barcelona and things started to fade away. But the team didn't. They still were the most calm, relaxed side on the pitch. They were behind, but they seemed to be way ahead, still executing their plan: allow as little as possible, capitalize on everything. Losing Diego Costa and Arda Turan due to injuries wasn't an issue. The team concept overshadows the individual stuff. The collective battle is more important than one-man success. The group win is greater. It's always better.

With that mental approach, they came back. With the kind of pressure you already saw before. They blitzed Barça's defense, pushed the pace and tried to break the Blaugrana as quickly as possible. It happened quite fast: four minutes into the second half, a corner kick found Diego Godin's head. The equalizer. The re-writing of history. The first half of Atlético's big dream -- conquer Europe, going through Barça and Real Madrid to do it -- was coming to life. But we still had forty-plus minutes to go, and Atleti had to protect the result. They had to defend their goal, play with intelligence, form the unbreakable two four-man lines and counter attack whenever it was possible. It was time to play Cholo Simeone Football.

They know how to do it. They've mastered the art of defending, they taught us that not allowing goals is almost as beautiful as scoring them. They showed us that you don't need a lot of money to build a winning team. You just need a plan, a striker, a coach, and heart. Freaking tons of heart.

I should have known that this was the most likely outcome to this match. Their first four games this season ended with a draw. The man who scored the only two goals for Barcelona in the first five matches wasn't 100% for it. Neymar did play well, but not long enough to make any impact.

I should have been ready to see a totally desperate and unorganized team running like crazy for their life. Tata Martino's incredible lack of tactical control over this squad introduced us to the craziest lineup I've ever seen in the last 10 minutes of the game: 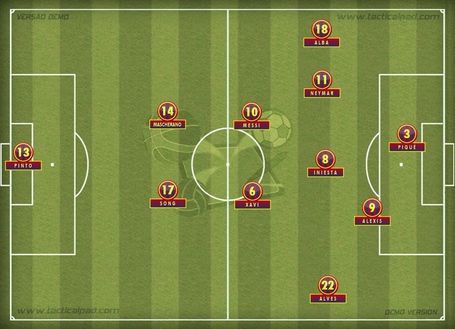 Look, I understand this is the last 10 minutes of a title game and you desperately need a goal. But you can't have Lionel Messi as your central midfielder and Piqué as your striker. The team went completely nuts, with everybody going to the box waiting for the ball. They forgot somebody needed to put the ball in the box.

I should have been ready to see Dani Alves crossing his way out of Barcelona. Unfortunately, one of the most dynamic and dedicated players to ever wear a Barça shirt will be remembered mostly by non-Barça fans as the wild-crossing-banana-eating player who just puts the circle white thing up there like Peter Crouch is waiting for it. Sorry, Alves. We need you outta here.

I should have been ready to see Javier Mascherano kick everybody's legs on his way out of Barcelona. He didn't. His performance this Saturday was the best of his Blaugrana career, by far. When Piqué decided he was gonna be Andy Carroll, Masche decided he was gonna be Carles Puyol. Like a lion, he defended his brains out and gave the rest of the team the freedom to think "hey, I don't care about defense anymore, Masche's got it". And he was superb. I tweeted during the game that he was the most deserving player of the title other than the Atlético players. I love you, Javier. Thank you for fighting.

By the way, you can say whatever you want to say about Barça's performance. You can't say they didn't fight. If they lacked creativity, they replaced it with heart. They tried, they went after every ball, they tackled, they were booked for hard fouls. They simply never gave up. They went down swinging. They made me proud of them.

Man, 90 minutes of a football game can bring you so many emotions in so little time. It's just the beauty of this sport. You can't help it. You have to step into the rollercoaster and let it take you wherever it wants. Whether you're happy or crying and screaming and cursing at the end, in the end, you just want to enjoy the ride. What happened this Saturday in the Camp Nou made me think of how lucky I am to be a part of moments like this. It sure hurts, but hey, you want to feel it. You have to feel it.

Congrats, Atlético. You deserve it. A lot.