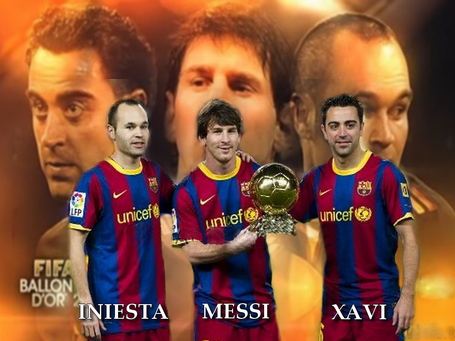 Who was the best player on FC Barcelona in its greatest period from 2008 to 2012?

The answer is easy, it is Leo Messi and the reason is obvious. Messi scored over 250 goals during that time and justly earned an unprecedented four Ballon D’or awards.

No, actually the answer is not as simple as that. If you really look at Messi’s goals they were set up by the otherworldly skills of Iniesta, who even exceeds the great Messi in individual talent with the ball but does not have Messi’s preternatural ability to put the ball in the net. Messi might score goals, but Iniesta creates them.

The above two opinions are really short sighted. Some one may get credit for scoring goals and another for assists, but the real value of a player is the one who imposes his will on the game and orchestrates play in such a way that the opposition rarely touches the ball, while our team tires them out so much they must finally relent and admit defeat. The person who does that is Xavi.

Such fruitless debates simplistically miss what all Barca fans now appreciate after a less than successful season. Barca’s dominance was due to the collective performance of all three players playing at the peak of their abilities over an unprecedented five year period of dominance. 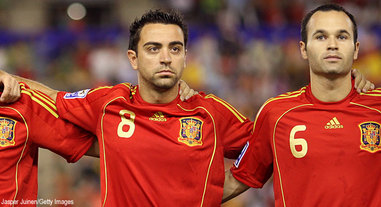 For the first time since 2008, we have finally been given conclusive proof that unless all three players are at the peak of their careers and fitness the results just can not be the same.
What is Xavi and Iniesta without Messi: the answer is great but just not as prolific because the greatest scorer ever in the game is not at the end of their passes. So that is why Spain’s great victories were predicated on 1-0 or 2-0 masterpieces of possession and one or two moments of breakthrough.

How about Messi without Iniesta and Xavi: well that is what we have seen from the Argentina team for the last few years although with a more mature Di Maria and Aguero that may change this summer.

However, what has given me some concern is that this year we might have had our first look at another permutation: a still in form Iniesta and Messi without a fully functioning Xavi, who is now in decline. Many have worried about the Ilusionista’s beautiful dribbles to the final third before he meets an impregnable defense that finally seizes back possession.

So the question now is what is Iniesta’s value without his legendary co-midfielder Xavi. That is a matter for debate, but it could be that Iniesta will never be able to play at his best without a worthy midfield partner who is the perfect complement for his talents.

So who was the greatest Barcelona player in our clubs immortal years? The answer, finally, seems obvious: it was Iniesta-Xavi-Messi (Inamess for short) and this, the greatest trio in the history of all sport, will never be equaled again.

Video: Greatest trio of all time: The Perfect Trifecta 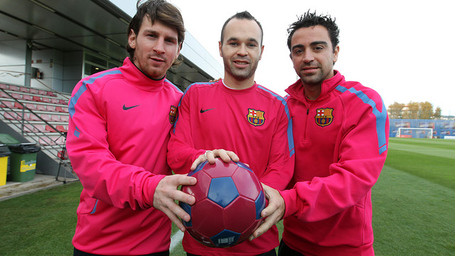 If you had to pick two players in their prime to start a team, which two would you choose?