So why do cules look at this joyous moment so bitterly now?

The most talked about move this transfer season is that Cesc Fabregas will leave Barcelona after three non-stellar years with the club. Some are now expressing sellers remorse and think they would have liked Cesc to have another year at the club, but others are saying good riddance. Some fans have even gone so far as to suggest that Cesc’s move to Barca has been catastrophic. This is no more apparent than in one post by a certain LordMoloch on Twitter: The Cesc Story.

But let us examine the premises of some of the more extreme Fab criticisms. For example, will Barca simply become a much better club with the subtraction of a player who has been a misfit and judged to be the root cause of the decline of our club?

Let's investigate. No one would argue that the Cesc signing worked out as well as most Barca fans would have liked. Much of the criticism is indeed valid. But Cesc is a different kind of player than most of our other homegrown talent. For this reason, it is best to judge his contributions as we might other Barcelona transfers who have also been mixed bags such as Villa, Mascherano, and Sanchez. Furthermore, many I think unfairly use Xavi and Iniesta as benchmarks for judging Fab's performance and then go on to make somewhat outlandish claims such as:

1) Fabregas is responsible for Barca's decline. This is ridiculous. FCB declined for many reasons from bad administrative and transfer decisions to the simple wear and tear, aging, and illnesses of some of our best players including Valdes, Abidal, Alves, and the team’s legendary leaders Xavi and Puyol. A very good coach who had to step down because of a tragic illness did not help matters either.

Had we planned better specifically for the decline of Xavi last year and Puyol two years ago, our club would be in infinitely better shape. But the club and its fans can’t face hard truths because we value our aging legends too much and expect that they will perform each year as well as the last until the truth is just too obvious to ignore. 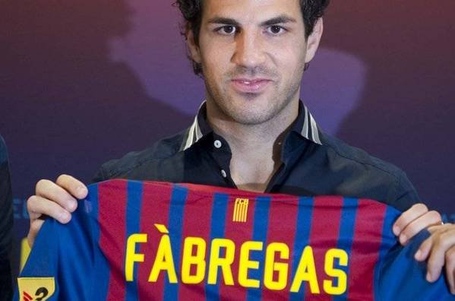 2) The Fabregas transfer was the worst in recent Barca history. Not even close. The worst transfer in recent history was the exchange of Eto’o for Ibra and we have not gotten over that one transfer which was the equivalent of our Pearl Harbor. We lost two world class strikers, tens of millions of dollars that we are still trying to make up for, and it led to a change in our style of play to Messi and Xavi dependency. Compared to this the Fab acquisition and sale was hardly decisive. We just got a player who was good but did not meet our great expectations.

The Fab acquisition may in hindsight have not been ideal, but it also gave us a player who was fairly good and who all of the last three Barca managers and a World Cup winning coach wanted on the pitch. If Fab had been fortunate enough to score a big goal for Barca say against Chelsea in 2012, fans would not hate him so much. If you remember, he almost did, but Ashley Cole cleared it from an open net as can be seen in the video below.

In contrast, David Villa, who had a much less successful stay with our club is somehow immortalized for reasons I don’t quite understand. I guess if you score an extraneous goal in a Champions League Final that gives you immunity from prosecution. Nevertheless, to make the obvious point that you are glad that now Fab is sold is a silly piece of self-congratulations. Everyone looks like a genius when they can critique events retrospectively.

Now that we know Cesc is leaving then the possibility that some of the Fab bashing is wrong can never be proven. For example, some could make the argument that had Cesc stayed, he would have turned into an extremely valuable Barca player. Not a legend but still very good. The only problem is that at the current Barca you have to be one of the best ever or a role player. God forbid if you are somewhere in between. 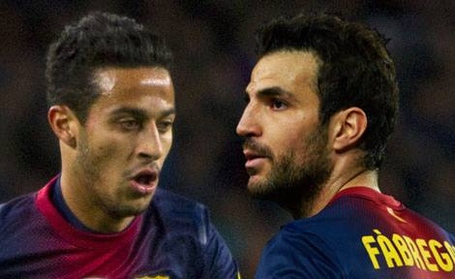 3) The Fabregas signing directly cost us Thiago. The loss of Thiago could be a big blow that will be much more costly than our acquisition of Cesc. But make no mistake, Thiago did not get more game time because Tito did not think he was good enough yet to get major minutes and may not have wanted to bet on this talent as a future starting FCB midfielder. The fact that he was able to leave after a contract blunder is not the inevitable consequence of signing Cesc. Moreover, Thiago may have even gotten a lot more minutes under Martino this year and might still have wanted to stay at the club after this season but, of course, few if any people really know.

The fact that Thiago may become a great player for Bayern for years to come changes nothing. We just don’t know what our club’s plans for Thiago really were. Some certainly argued that his anarchic high-risk high-reward style was ill suited for a Barca team that at least up till now values possession and control over improvisation and creativity. We still will have to watch to see how Pep uses Thiago at Bayern to even have any idea whether he was the next Xavi or Iniesta or even a world class midfielder who would have fit into a Barca team.

4) The fact that fans are angry now that we see how much FCB has declined makes Fabregas an easy target for fan outrage, but this makes him more of a scapegoat than a deserving fall guy. He was the prodigal son who was supposed to ensure the club's future. Now that he has not done that the Catalans have banished him back to London. But is all the Fab bashing justified?

Both are very convenient targets for those who want quick and easy answers. Make no mistake, I am also distressed about our club’s too soon decline and hold some responsible. In a future post, I will reveal someone who I believe is much more at fault. If you think about it, you know too.

The vital match that all three of our recent transfers have been blamed for losing. Will they ever be forgiven?

Link: The Semi Final That No Cule Will Ever Get Over 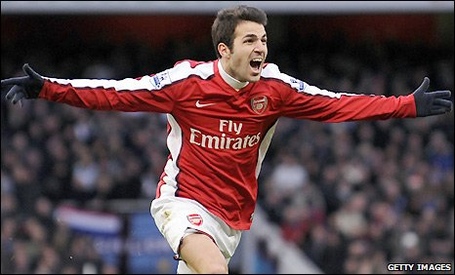 Please stop ruining both of our clubs with your bad transfer decisions.

Should we just give Cesc Back to Arsenal For Free as some sort of apology?

Should we give Cesc to Man U for cheap just to prevent Mourinho from getting him?

If all three stayed, which transfer would have had the best career at Barca?