Various Spanish media have today reported on Luis Enrique's proposed adaption to Barça's traditional 4-3-3 formation, but would it work?

Share All sharing options for: Would a 4-3-1-2 Formation work for Barcelona?

The hypothetical formation sees new signing Luis Suárez alongside Neymar as the two up the top with Lionel Messi sitting deeper. Andrés Iniesta plays behind the Barça number 10, while Javier Mascherano and Sergio Busquets make for a double pivote. 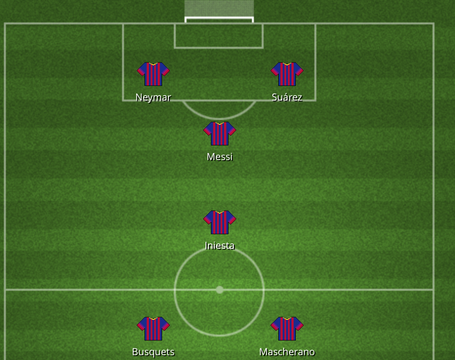 We'll start with the midfield. This is a reversal of the style we have seen with Barça for many years now, usually it is two attacking midfielders (Xavi and Iniesta) with Busquets being the sole defensive midfielder behind him. Mascherano's impressive performances at the World Cup may have convinced Enrique that he deserves a starting spot in the team and can offer something different to Busquets.

With two defensive midfielders, you'd expect to see the centre backs less exposed but you also sacrifice another attacking option and are forced to rely heavily on the one attacking midfielder, in this case Iniesta. This can offer some explanation as to why Cesc Fàbregas was let go and Ivan Rakitić was brought in. Fàbregas sometimes struggled to orchestra the midfield and without a Xavi or Iniesta to help him, you could see Barça losing their midfield spark.

This formation also requires the sole attacking midfielder to be very energetic and cover large areas of the pitch. If Xavi does stay at the club, it is hard to see him working well in this role due to the physical demands. Of course, he still has the passing ability to play in this position but if Xavi does play and I'd imagine Enrique would revert back to the 4-3-3 style.

This shift also changes Messi's duties. Before his role was to be the end of the attack and produce the finish to any attacking move. Messi always played as a false nine but now it appears he will be playing as a false ten. Linking with Iniesta to ease the workload placed on the Spaniard's shoulders before bursting past the two strikers and having an attempt on goal.

Dropping Messi deeper is something we've seen before. With Argentina at the World Cup, he would often have Gonzalo Higuaín playing ahead of him so would naturally come deeper to pick the ball up and start dictating play. This the kind of role you'd expect him to play in this formation and use the great vision he has to pick out a pass or use his pace to run at the defence.

Next we have the strikers. With two strikers up front, this should create space for Messi to run into as in the past we have seen three or four defenders gang up on him and limit the space he can run into. With Neymar and, in particular Suárez, the defenders can't always close Messi down as leaving a player like Suárez free near the penalty area can prove catastrophic. As England found out during this summer's World Cup.

The front two will also be charged with creating width to the play. Neymar naturally drifts to the left, as did David Villa during his time at the club, but Suárez was more of an out-and-out number nine at Liverpool. It's important for them both to work hard on this element of the game so that Barcelona don't become too narrow and easy for defensively minded teams to guard against.

Overall, I think this formation could work for Barcelona and utilise the skills of each player in the team. But with both Suárez and Neymar out for the beginning of the season it may be a while before we actually see it implemented.