The World Cup quarterfinals start this Friday, and the hosts can be in serious trouble facing a great Conmebol rival. Can Neymar lead the Seleção to their first semifinal in 12 years?

World Cup quarterfinals. The time to separate boys from men. Time to see who's really ready to win the biggest sports tournament in the world.

It has been an amazing Cup so far. So many surprises, so many emotions, so many great games. It is, without a doubt, the best World Cup ever. Brazil has been an incredible host country, and people from all over the planet are having a great time.

And the hosts are facing a huge challenge. Brazil had little trouble in their Group Stage, and they cruised through fairly easily. Then, an amazing thriller against Chile, in which the Seleção was taken to deep waters, but kept its cool and composure and pulled off a memorable penalty-kick win over Alexis Sánchez's squad.

Now, they'll face Colombia, who is one of the best stories of the World Cup, along with Costa Rica. Even without world-class striker Falcão García, they shattered the Group Stage, winning all three games by wide margin. In the Round of 16, a calm, dominant 2-0 win against Uruguay that introduced to the world its new babyface: James Rodríguez. The 23-year-old AS Monaco star is the best player of the tournament, and even at a young age, he has been carrying the team on his back, leading Colombia to their first ever World Cup quarterfinal appearance.

Brazil also has a young star as their leader. Neymar has not disappointed so far, scoring 4 goals in four games and shining at the most important moments. Against Chile, he got hurt two minutes into the game, as a hard foul by Chile's Aránguiz injured his knee and thigh. Neymar continued in the match, but never settled into his usual rythm, and had little impact, although he showed enourmous mental strenght when he converted the game-winning penalty kick that put Brazil here. Now, he's fully recovered, as training sessions have showed, and he is expected to be the superstar that he needs to be if the Seleção wants to win it all.

Brazil's coach, Big Phil Scolari, faces difficult challenges going into this particular match. His starting defensive midfielder, Luis Gustavo, was suspended with his second yellow card and misses this game. Since he doesn't have another true DM to replace Gustavo, Scolari tested several different lineup changes, that included Paulinho, Henrique, Hernanes and Willian amongst the starters in various schemes. All of those changes, incidentally, included Fred coming out of the starting XI. It's not surprising, since Fred has had a horrible Cup so far.

Different media outlets say that the most likely formation to start the game will have Napoli's Henrique as the starting DM, although he can change positions with centerback David Luiz.

Believe it or not, Colombia are actually favorites to win this match. Many analysts in Brazil consider them to have a better team now, and James Rodríguez is a huge threat. Will Neymar carry the hosts to the semifinal? Will Colombia shock the world and pull off one of the biggest upsets in World Cup history? The only thing we know is: it will be amazing. 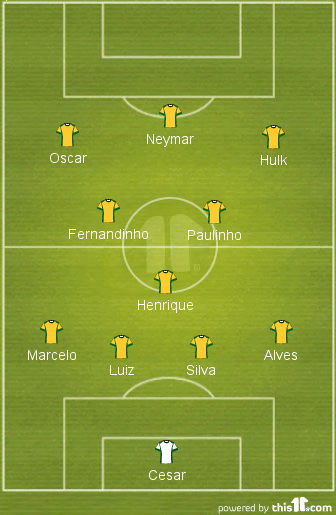 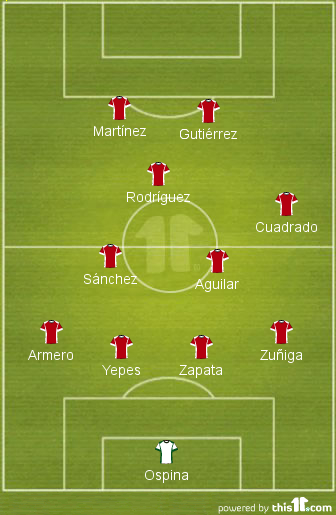