Luis Enrique gets full marks for his tactics in his first game in charge at Barça.

New FC Barcelona manager Luis Enrique could barely have asked for an easier fixture to begin his spell in charge at the Camp Nou than Elche CF at home and, despite Javier Mascherano’s first-half red card, the new era began as expected, with a commanding and very encouraging victory.

Although many of the faces in the line-up were new, the tactics and narratives were very familiar. Barça started the match playing the familiar 4-3-3/3-4-3 hybrid, while Elche’s 4-5-1 often became 6-4-0 (as pictured below). As we have become used to seeing, the away side surrendered the battle for the ball and instead sat deep, remained very narrow and compact, and looked to direct Barça’s play wide. 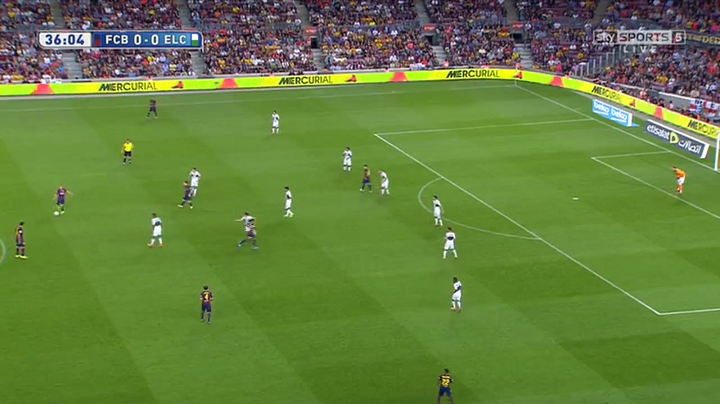 Knowing that in all probability they had ninety minutes to score one match-winning goal, Barça were patient and unhurried in possession, happy to move the ball around but careful when playing the final pass. This meant that turnovers were relatively rare and Elche didn’t have many chances to break. The few times the visitors did work the ball forward, they did so quickly but kept nine men back, meaning their advances never lasted long.

In many ways it was business as usual, with Barça happy to maintain possession of the ball, press hard whenever it was lost and wait for one of their overworked opponents to make a mistake. The way in which Lionel Messi opened the scoring was a classic example of this strategy paying off: an unexpected turnover near Elche’s box led right-back Damián Suárez, under pressure from Jordi Alba, to rush his pass out and give the ball straight to the ever-alert Sergio Busquets, whose interception and swift pass exposed the sudden uncertainty in Elche’s defence. Predictably, Messi spun away into space and arrowed a clinical finish into the corner of Przemysław Tytoń’s net.

Messi’s role was much the same as ever, but the way those either side of him behaved was quite new. When Barça approached the Elche box, Messi’s involvement in the build-up often left the wide-men playing as centre-forwards (as pictured below). The ease with which this positional interchange happened showed the class and confidence of Rafinha and Munir, but also hinted at things to come when Neymar and Luis Suárez come into the side. 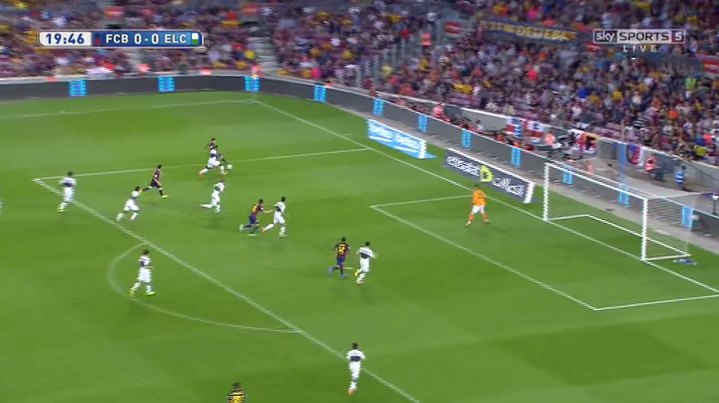 The only blot on an otherwise perfect first half was Javier Mascherano’s red card, issued just before half-time for a clumsy last-man foul on Garry Rodrigues. In one moment Elche proved that the old problems at the back still remain: it only took one slip in midfield and an accurate pass in behind to put Barça in real trouble.

While the first-half was close to perfect, the really encouraging stuff came in the second. Down to ten men, Luis Enrique changed to a very fluid 4-3-2/3-4-2 which became a containing 4-4-1 without the ball. The on-ball system was more or less the same as it would be with eleven but with a front two instead of a three.

Second half - with the ball: 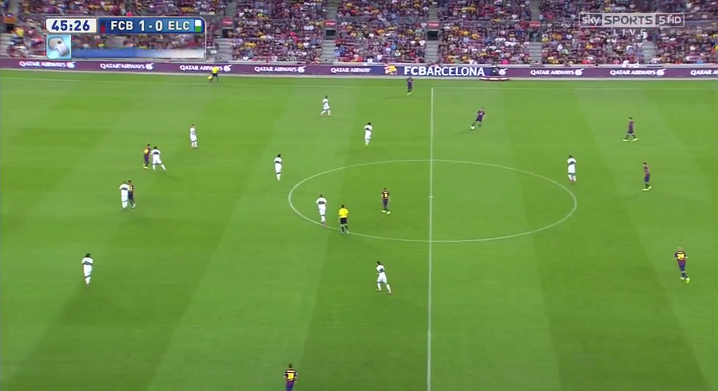 Second half - without the ball: 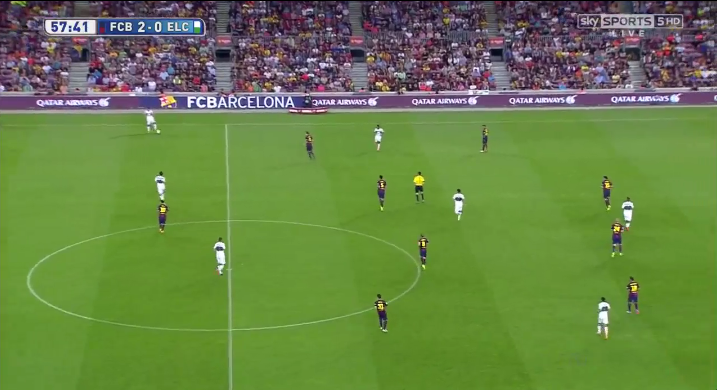 Being so adventurous with the ball looked something of a gamble on paper, but in reality personnel and opposition made it a no-brainer. With players as good as Busquets, Rakitić, Iniesta and Messi in the middle, as well as natural wing-backs in Alves and Jordi Alba, it was the obvious solution. We probably wouldn’t see this formation used against a high-quality Champions League side, but against a domestic opponent that played as unambitiously as Elche, there was no logical reason not to do it.

Even though the away side had the extra man the majority of the game was still played in their half. If anything, the numerical disadvantage meant that Barça did less to control the game and more to win it.

Their passing tempo increased and the creative abilities of the attackers were indulged. The number of high-risk forward passes and dribbles increased and Messi’s static presence high-up the pitch, such a prominent feature of Argentina’s World Cup campaign, prevented Elche from throwing too much forward.

Given the above, it wasn’t that much of a surprise that Munir’s goal came so quickly after the restart, putting the result beyond doubt with nearly half of the match still to play. It was a simple but clever move, one of the most familiar in two-striker systems: with Rakitić on the ball in front of Elche’s midfield, Messi came deep, Munir went long and the Croatian’s deflected pass found the Munir’s run in behind, leaving him with a simple finish.

Messi’s second goal also owed a lot to the tactics employed in the second-half. As well as being a simple demonstration of his ludicrous individual ability, it was an example of Luis Enrique’s strategy creating the perfect conditions - amount of space, number of passing options, defensive cover - for Messi to take the ball, combine with his teammates and find a way to goal as only he can.

Taking into account the number of debutants in the starting eleven, the fact that it took them some time to find a way through a stubborn defence and the fact that they received first-half red card, it was a very encouraging Barça performance and one that bodes well for the future.

As well as seeing organised and fluid positional interchange, a very good display of pressing and a smart reaction to being a man down, there was a noticeable development in attacking set-pieces. Hopefully we will see more rehearsed routines which leave an attacker with a clear shot on goal such as the one that nearly led to Dani Alves opening the scoring after half an hour.

Bigger tests lie ahead, but the Luis Enrique era is off to a good start.

Claudio Bravo: totally untested. The Chilean could quite reasonably have expected an easy ride at home to Elche but even after Mascherano’s dismissal they rarely threatened. In a way, that shows just how excellent the defensive display in front of him was.

Jérémy Mathieu: in abstract, a debut in which an early red card meant that he had to play with two different centre-back partners and do more defending than he would have liked sounds like something of an ordeal. In reality, it was as close to a dream introduction as he could have asked for. It may only have been Elche at home, but Mathieu was the pick of the defenders.

Ivan Rakitić: slotted into the Xavi role with ease: the Croatian had more touches than any other player, calmly controlled the tempo throughout and looked capable of playing the almost-impossible pass often required against defences this deep. Also showed the box-to-box qualities he is expected to add to the side, athletically carrying the ball forward on a few occasions and even sprinting into the box when the ball went wide. Crowned an excellent performance with an admittedly fortunate assist for Munir.

Munir El Haddadi: another confident performance from the man of the moment. After coming within inches of opening his first-team account with a thunderous 21st minute drive, he found the back of the net just after half-time with a composed finish. Positionally sound and diligent off the ball, he sometimes made the wrong decision with it but for an 18 year-old that’s to be expected. Very encouraging.

Rafinha: very tidy indeed. Took up good positions, pressed intelligently and kept the patient attacking moves of the first-half ticking over. Was perhaps too content to play in front of the Elche defence, but was nonetheless unfortunate to be hooked at half-time when Luis Enrique re-structured the side to fill the Mascherano-shaped hole at the back.