This Week in Barça starring Xoel Càrdenas: Week of September 15, 2014

Share All sharing options for: This Week in Barça starring Xoel Càrdenas: Week of September 15, 2014

Remember when FC Barcelona always suffered when they'd come back from the international break?

Not so much last Saturday.

Barça got the three points as they defeated Bilbao 2-0 at the Camp Nou. The Senyera kit was in full display, as the Catalans wore the kit in honor of the National Day of Catalonia (11 Sept). Many Culés are a bit superstitious about the Senyera kit, as it is seen as having some bad luck to it. And for the first 78 minutes of the game, maybe it was bad luck. Barcelona controlled the pace, possession (as always), but had no goals to show for it. Finally, in the 79th minute, a Bilbao mistake lead to Lionel Messi teeing up Neymar for the opening goal of the game. Just five minutes later, #NeyMessi struck again as Messi found Neymar near the penalty mark and the Brazilian put it low and in the back of the net to make it 2-0 and secure the three points. Luis Suarez watched from the box suite as his teammates keep the machine rolling. Luisitio can't wait till he joins Neymar and Leo on that Barça attack.

And to think, @LuisSuarez9 is still to come for this @FCBarcelona attack alongside #Messi and @neymarjr #ShowNoMercy pic.twitter.com/GObRLfVum6

Javier Mascherano and Jeremy Mathieu had a good game against Bilbao. Martin Montoya struggled at times. Finally, Claudio Bravo made the stops when needed. Bravo and Barcelona record their third consecutive shutout. Three games, three shutouts. This is only the third time in the history of the club that Barcelona has started a Liga season with three wins and no goals conceded (1945-46, 1984-85).

It must be said that it is still a bit of a concern that Barcelona were unable to find the back of the net until the 79th minute. If Barcelona suffered during the Bilbao game, it was by their own doing, as "control/dominate the game, but unable to execute the finish" seems to plague Barça at times. Luis Enrique will continue to work on this as long as needs to. The addition of Suarez will certainly help aid this.

Munir El Haddadi has a solid game. There were a few moments where the kid displayed his lack of experience, but overall, Munir continues to show the football world he is first-squad quality at such a young age. Munir had penalty not given to him after a Bilbao defender clearly shoved him, as well as a goal disallowed due to a questionable offside ruling. Lucho has brought intensity and other positive things to this squad. But one of, if not, the best decision Lucho has made thus far is keeping Munir El Haddadi on the first squad and sending Gerard Deulofeu on loan.

If Munir keeps this play up, will Deulofeu see as much playing time as once promised at Barcelona in the future again?

Munir has been far more impressive than Pedro has for Barcelona this season. I know Pedro has the experience and has made big goals for the club, but after three Liga games, Pedro has yet to show up for this Barça offense. Meanwhile, Munir is making his name known around the football world.

When Luis Suarez joins the squad, I don't believe Pedro deserves to be above Munir in the depth chart, meaning I'd choose Munir over Pedro when needing substitutions. I understand Munir—who can play both LW and RW—prefers to play left wing. Even Sandro has contributed more than Pedro thus far this season. I hope Pedro steps it up in the Champions League, but after nearly three seasons of inconsistency from Pedro, I'm not holding my breath.

Onto the Champions League

The 2014-15 UEFA Champions League campaign begins for Barcelona on Wednesday night as they take on APOEL at the Camp Nou. While this may be seen as an easy win for Barça, don't expect Lucho to step his foot off the gas for this game. One aspect that could be taken into consideration for this game other than the win/three points is growth in goal differential. Paris Saint-Germain will battle Barça for the top spot in Group F, and who knows, the fight to win the group could be decided by goal differential. We know PSG can score goals and lots of them, so it is vital Barcelona doesn't slow things down against APOEL-both in Wednesday's game and in their second APOEL matchup in the group stage. I'm not saying Barcelona needs to put up six goals (although that would be nice) nor will they be thinking solely on point differential. All I'm saying is that the goal differential may be a factor in determining the winner of this group, so no stepping the foot off the pedal for Barcelona against APOEL—even if Barça get a 4-0 lead by halftime.

If I were the manager, I wouldn't change much in the starting XI against APOEL than any other Liga game that Barcelona has played. 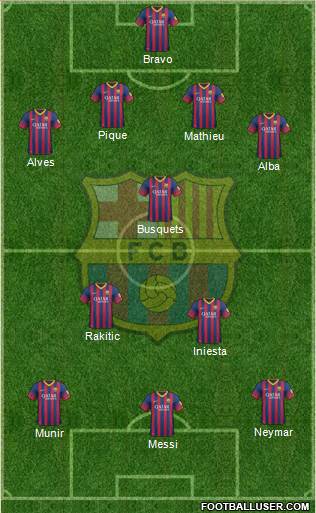 Claudio Bravo keeps the GK position. Dani Alves is expected to be ready for the game after sitting out the Bilbao game with knee discomfort. Gerard Pique and Jeremy Mathieu make up my CB positions with Jordi Alba at LB. For my mids, I go with Sergio Busquets at CDM, Andres Iniesta and Ivan Rakitic. With Andres Iniesta coming off a knee injury, which kept him out of Spain duty during the international break, I'd limit Don Andres' minutes to give him some rest. Xavi did not play against Athletic Club and can play a good 30-35 minutes of the game, especially against a weaker opponent in APOEL, so I'd bring him in to substitute Iniesta. Up front: NeyMessi with Munir. As previously mentioned, Munir plays best at LW, which is already taken up by Neymar, but can play RW. So far this season, Munir is offering more to the offense than Pedro, thus I'd start Munir at RW for this game at the Camp Nou.

Barcelona's hated rival is struggling and I'm not complaining-nor will I ever. Real Madrid lost the Madrid Derby by 2-1 to Atletico Madrid at the Santiago Bernabeu. Diego Simeone watched from a box suite as he continues to serve his suspension. Simeone's men continue to show they fear no team, no opponent stadium.

After the loss, much of the blame for Madrid's loss went to Iker Casillas. I'm no Iker apologist, but fairly or unfairly, the blame will always go to Casillas as long as he's the goalkeeper. Iker is too easy of the target. I'm not saying Casillas does not have some fault in Madrid's struggles, but he is, at times, unfairly targeted by Madridistas and the Madrid media as the scapegoat of all of Madrid's problems.

Madrid has other problems both on the pitch and in the locker room, according to reports. This is no shock to any football fan, as Real Madrid has a history of locker room drama, especially in recent years. Meanwhile, Angel Di Maria­—that guy Florentino Perez didn't appreciate—scored a lovely goal for Manchester United and had a brilliant Man of the Match performance over the weekend.

You can't tell me Cristiano Ronaldo and some of the other Madrid players don't miss the engine of last year's Madrid's offense in Di Maria. Xabi Alonso must be a happy guy at Bayern Munich as well.

Florentino Perez continues to be the spoiled child of the football world, as he buys and overpays for the player(s) of the moment without considering how they would fit on the squad. Team chemistry and player positional preference is not important for Perez; not now and not ever. As a Culé, I am grateful Florentino continues his tradition of ruin and destroy his own creation at Madrid. Gracies Flo!

For the first time ever, FC Barcelona is six points ahead of Real Madrid after the first three games of a Liga season.

This week, the road to Berlin and the 2015 UEFA Champions League Final begins as FC Barcelona takes on APEOL on Wednesday. It shouldn't be a difficult game to win, nevertheless, like any other game, it's a game not take the gas pedal off of.

Let the journey toward another European championship begin.

Let the midweek matches of glory begin all around Europe.

Xoel, The Voice of Els Culés and host of "This Week in Barça" every Monday on SB Nation.