Barcelona vs APOEL: Predict the Lineup

Share All sharing options for: Barcelona vs APOEL: Predict the Lineup

Barcelona will debut in the UEFA Champions League this Wednesday, as the Blaugrana take on APOEL Nicosia at the Camp Nou. It's probably the weakest opponent Barça will face in the group stage, so it's good that we get to face them right at the start, so we can get confident for the more difficult matches against Ajax and PSG later this month.

Since it's a possible easy one, we might get to see a couple of changes in the lineup from coach Luis Enrique. Keep in mind that Barça will start a streak of six games in eighteen days, which will require the boss to rotate the squad as much as possible to get everyone healthy through this difficult span, while securing positive results in all six encounters.

So let's play Lucho, shall we? From now on, before every Barça match, you'll get to pick the starting lineup you'd like to see. Use the comment section to put the players you want not only in the starting XI, but also on the bench. Don't forget to state why you're choosing said lineup, so we all can have a nice conversation and see if we can guess which team is playing on each match.

I would bet Lucho doesn't go full strength on this match. We might see youngsters like Munir and Sandro get another chance. I also think Rafinha will be a big part of Enrique's plans for this particular match. Messi is always going to be there. I'm curious to see which GK starts. Ter Stegen is fit. Is he getting the job? 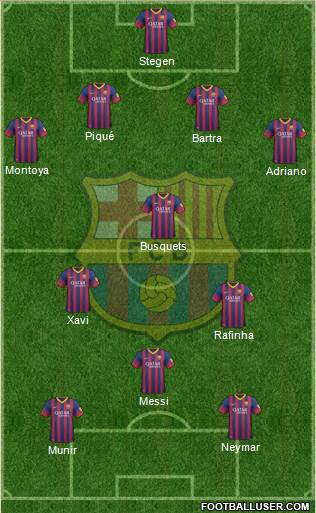 Rotation is key. This lineup is quite ready to beat APOEL, without making the guys exhausted.

Of course, this is my opinion. What do you guys think? Let's predict the lineup!!!