Barça have been criticised by some observers for winning by only one goal, but this was a controlled performance that made sure victory was never in doubt.

In Luis Enrique’s first UEFA Champions League match as FC Barcelona manager, the tactical match-up was familiar and straightforward: Barça’s proactive attacking 4-3-3/4-3-1-2 versus APOEL’s reactive defensive 4-4-2. Barça’s aim was to maintain control of the game, patiently moving the ball around and waiting for a gap to appear before springing through with some combination of Lionel Messi, Neymar and Munir. 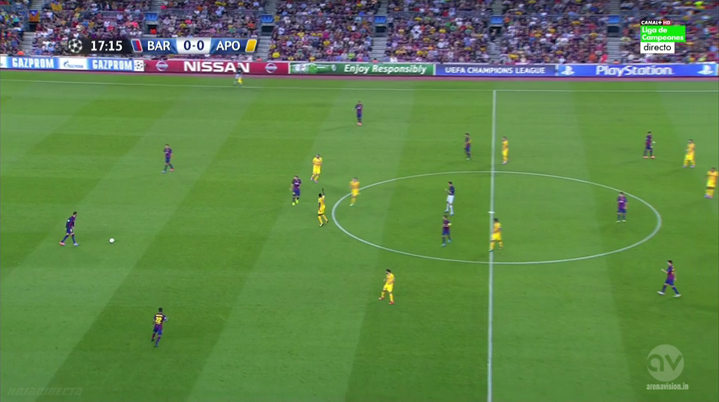 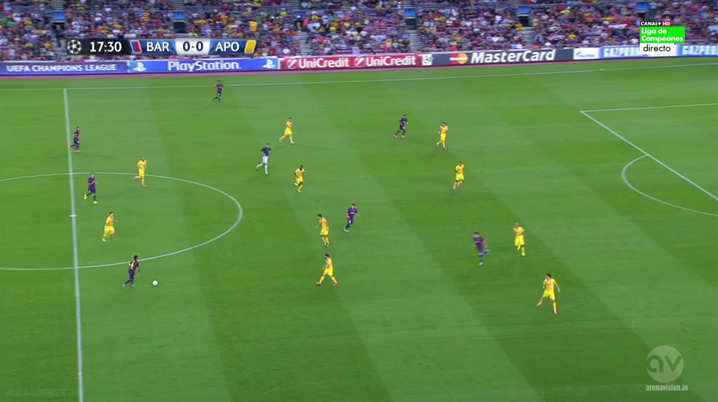 Luis Enrique’s men succeeded in controlling the game from start to finish and such was their superiority that the one-goal margin arguably flattered the visitors, but the fact that Barça didn’t create much in open play could be seen as slightly concerning. After all, later in this competition they are inevitably going to face better opponents that use the same defensive tactics but offer more going forward.

The most notable aspect of Barça’s performance was the aggressive pressing on show. The forwards pressed much more when APOEL had the ball in deep areas than they did against Athletic Club, and the defence and midfield were positioned to look to win the ball back as soon as it came into their zone. The effectiveness of this tactic was illustrated by the fact that Barça’s average spell of possession lasted eight passes, whereas APOEL usually lost the ball after only three.

The exact responsibilities of Barça’s front three remain slightly unclear. They were much more involved in the press than they were at the weekend and although they did not record many actions in the Opta statistics, they often closed a defender down to direct his passes into pressing traps, which contributed to the success of those behind them. 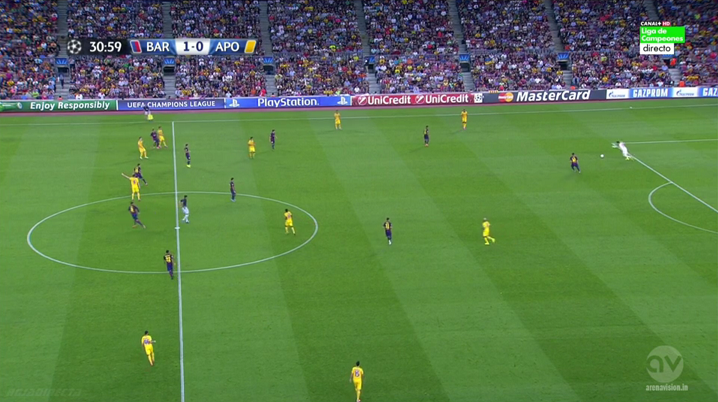 Although Barça were playing at home and against a relative minnow, this was still a Champions League game and so there was a considerable amount of pressure on Sergi Samper, who made his debut playing at the base of Barça’s midfield. Fortunately, the conditions were close to perfect for a good debut: APOEL were very defensive and stayed deep, sat in two rigid banks of four that didn’t pressurise the man with the ball until he approached the final third.

This meant Samper’s job was relatively easy. He almost always had time, space and passing options when he had the ball and time to read the situation when he did not. There were three second-half counterattacks from APOEL that perhaps he could have anticipated and cut off, one of which nearly produced an equaliser, but in general his positional awareness was excellent and his calm and occasionally ambitious distribution was close to flawless. 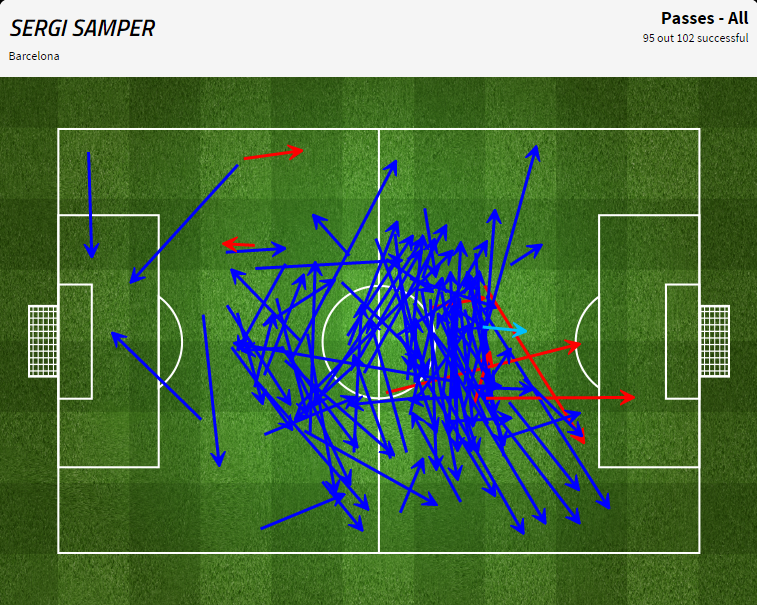 Ahead of Samper, Xavi Hernández and Sergi Roberto occupied the midfield spots that so far this season only Ivan Rakitić and Andrés Iniesta have played in. Both gave good performances, calmly finding space and circulating the ball, keeping things ticking over rather than forcing things and turning the ball over.

Given how different they are as players, it’s obvious that Xavi and Rakitić’s roles in the midfield are distinct. While Rakitić has regularly pulled wide and occasionally made forward bursts with the ball, Xavi played his familiar game, staying central when Barça had the ball and keeping the ball moving with short, simple but incisive passes. The differences in starting position are obvious when one looks at where they look to receive the ball. 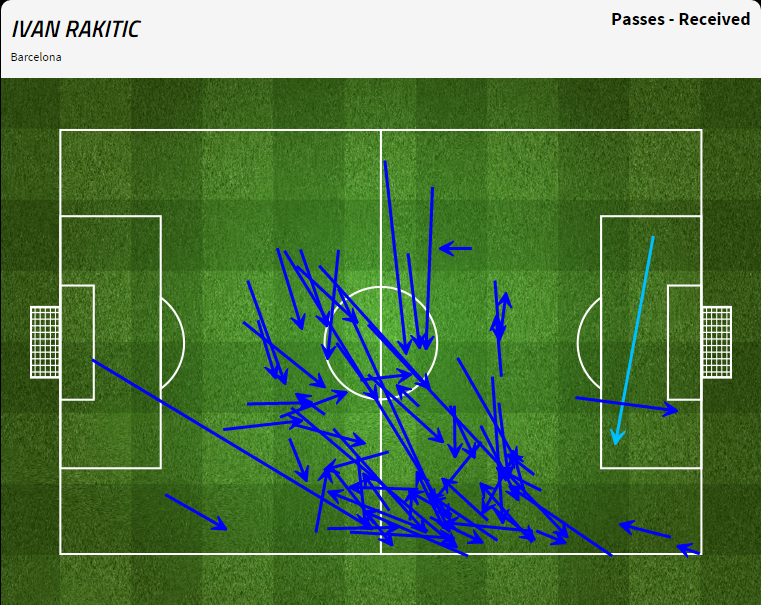 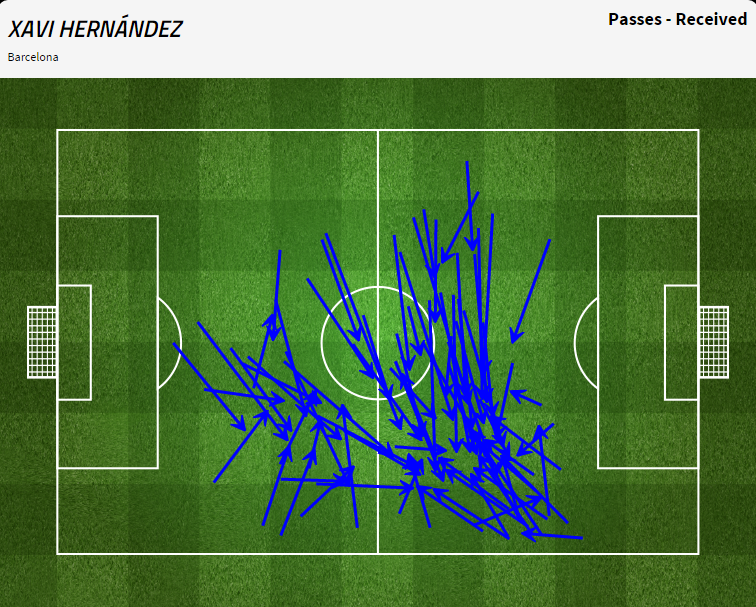 Sergi Roberto gave a typically 7/10 performance. His limitations are well-known and for that reason he is a figure of fun in some quarters, but he was a combative partner for Xavi and Andrés Iniesta and kept things ticking over without really catching the eye. Although he is not a player of great imagination or flair, his graft and generally sensible play were useful when it came to maintaining control against an opponent like APOEL.

Neymar got his first competitive start of the season, coming into the starting eleven in place of Pedro Rodríguez, who has worked hard but struggled to produce anything of note in a central role that doesn’t really suit him. Unsurprisingly, Neymar looked much more at home, often taking the ball and turning with it, spotting and trying the risky passes that unlock deep defences and looking capable of making something out of nothing.

The best example of what the Brazilian offers that Pedro currently does not came in the 57th minute, when Neymar showed excellent predatory positioning, anticipation and movement to arrive alone in front of the goal and almost score. Unfortunately, he couldn’t quite make contact with Xavi’s cross, but on another night it would have been the decisive second goal that killed the game as a contest. 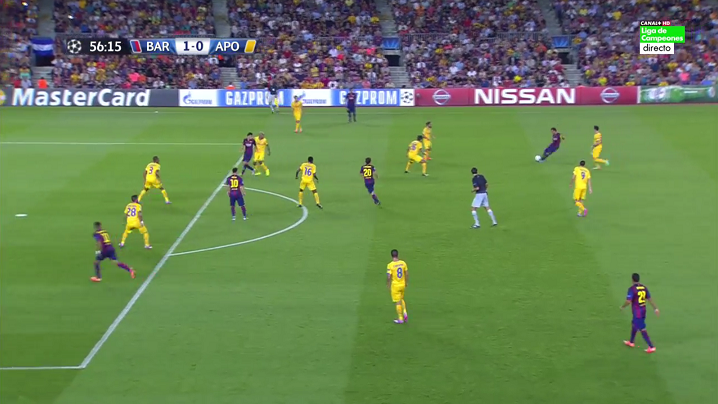 The final positive was that we saw Barça’s first set-piece goal of the season when Gerard Piqué headed in Lionel Messi’s crossed free-kick in the 28th minute. The improvement in attacking and defending set-pieces has been evident since Luis Enrique took over and hopefully we will see plenty more goals like this one over the course of the season.

The only negative, if we are being picky, was that there are still concerns about the narrowness of Barça’s strikers’ starting positions. It has been a feature of every match under Luis Enrique so far and it’s clear that the idea is eventually to play with a fluid frontline of Messi, Neymar and Suárez near the opposition box, which makes perfect sense.

At times, however, they are standing too close together in central areas and that makes it difficult for the midfielders to play forward passes. Luis Enrique said after the match that he felt Barça’s final pass had been lacking and while he's right that they did mess up a few counters that should have had relatively easy finishes, it's difficult not to feel like too often the forwards aren’t positioned well enough for the final pass to be an easy one. 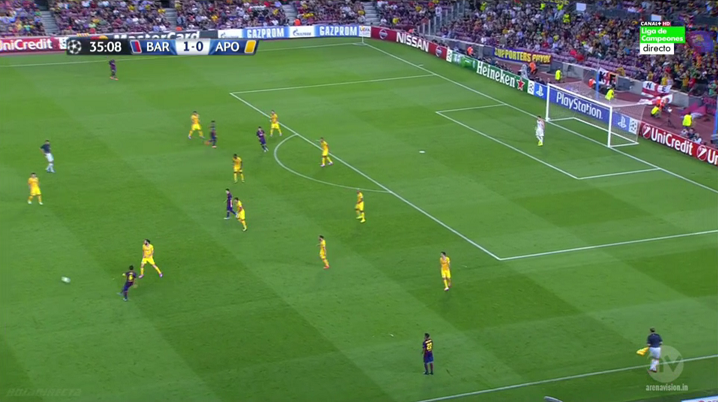 That was a minor issue though on a night of many positives. FC Barcelona now have four wins from four games this season and Luis Enrique and his host of debutants have made a good start to life in the Champions League.

To APOEL’s credit, their commitment to their strategy was admirable and although the home side were always in total control, they rarely created anything that could be described as a clear-cut chance. That Barça had 72% of the ball but only produced six shots on target is testament to APOEL’s defensive resilience. By the same token, that Barça had 72% of the ball shows just how outclassed the visitors were.