On the most frustrating night of Luis Enrique's tenure so far, Javi Gracia's Málaga gave a lesson in how to defend Barça.

The first match in which Barcelona dropped points this season was a creditable away draw at Málaga. For many, it feels more like a defeat due to the poor quality of Barça’s performance, but this was the definition of a stalemate. Despite Luis Enrique fielding his first choice midfield and the strongest available strikeforce, Málaga’s simple tactics worked perfectly and Barça failed to register a single shot on target in a game for the first time since the 2003-04 campaign.

This was a match in which the tactical problems that have previously been identified in this column came together to stop Barça reaching their maximum potential. There were other factors, of course – Málaga were absolutely excellent, the pitch was awful and, this being many of the players’ second game in four days, there was probably an element of fatigue as well – but Luis Enrique’s formation and tactics had arguably the biggest impact and made it as frustrating a match as we will see all season.

Barça once again played in a 4-3-3/4-3-1-2 shape and had the majority of the possession from the first whistle, but they went nowhere with it. Most of their early attacks went down the left with Neymar, Andrés Iniesta and Jordi Alba combining, but they didn’t produce much. In stark contrast to the Levante game, Barça’s passing tempo was very slow, their pressing non-existent and the strikers’ movement lacklustre. 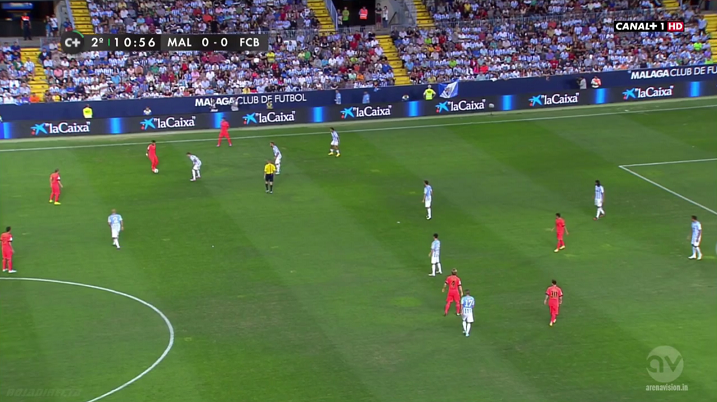 Málaga’s plan was extremely simple and they carried it out superbly. They sat deep in a compact 4-3-3 and applied pressure intelligently in order to direct Barça’s passing away from the centre and into unthreatening wide zones. It required incredible levels of fitness and concentration to work, but Javi Gracia’s men gave it everything, pressurising Barça’s players for the entire ninety minutes.

Whenever Ivan Rakitić, Andrés Iniesta or Lionel Messi took the ball, two or three blue-and-white shirts surrounded them and they had no time to look up and find a teammate. When the ball went out wide to Douglas or Jordi Alba, however, Málaga assumed their defensive positions and closed off any avenue in which the ball may come any further forward. Consequently, Barça found it very difficult to do anything in or around the penalty area. 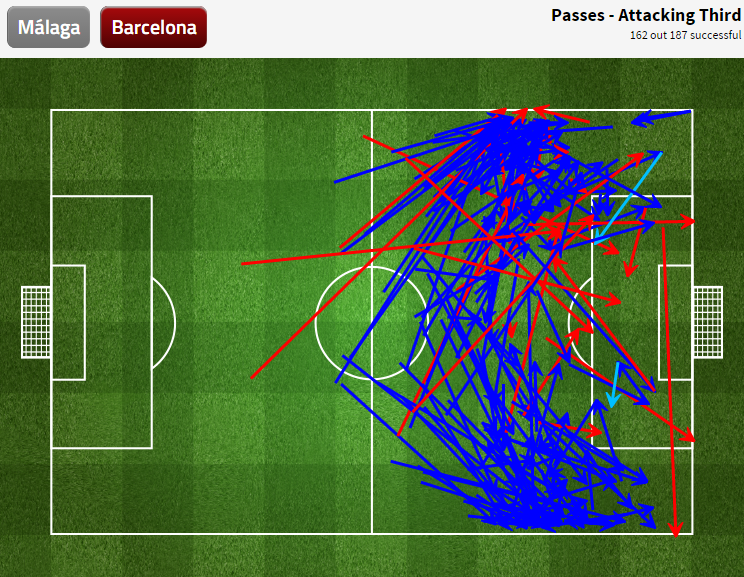 At transitions, Málaga looked to play long to Nordin Amrabat, who was exploiting the channels between Barça’s centre-backs and wing-backs, often forcing Douglas and Alba to retreat and the centre-backs and midfield to follow suit. In the second, the home side sensed panic and applied pressure in Barça’s half, for a period flooding forward almost at will by provoking rushed clearances and sending them back where they came from.

Barça's biggest problem was that their shape made it very hard for them to trouble the home side in attack. Rakitić and Iniesta stayed back more or less at all times and this meant that the forwards could not press and win the ball high up the pitch without leaving huge spaces behind, nor play quick combinations through the middle to get through on goal.

Presumably Luis Enrique was wary of the counter-attacking threat and had instructed the players to prioritise their defensive solidity over committing men forward to score. Whatever the reason, Barça played a relatively cautious and slow tempo game all night.

This meant that Barça were attacking a very organised eleven with just five players: the front three, who found it impossible to get room to turn with the ball in the final third, and the wing-backs, who repeatedly received passes on the flank but found that they had nowhere to go and crossed unsuccessfully.

There was simply no way to connect with the strikers. The stats say it all: Pedro, Neymar, Sandro and Munir had 89 touches of the ball between them. That’s just six more than Douglas had by himself, and he only played 73 minutes. The forwards produced four shots but all were blocked or off target.

It was almost exactly the same as the Villarreal game a few weeks ago. Reduced to relying on moments of individual brilliance, Barça struggled to make clear chances collectively and quickly became reliant on Messi to create something out of nothing. He eventually began to drop deep to take the ball but found almost the entire Málaga team between him and his forward passing options. Once again, the forwards were isolated and stood still, waiting for something to happen rather than making it happen. 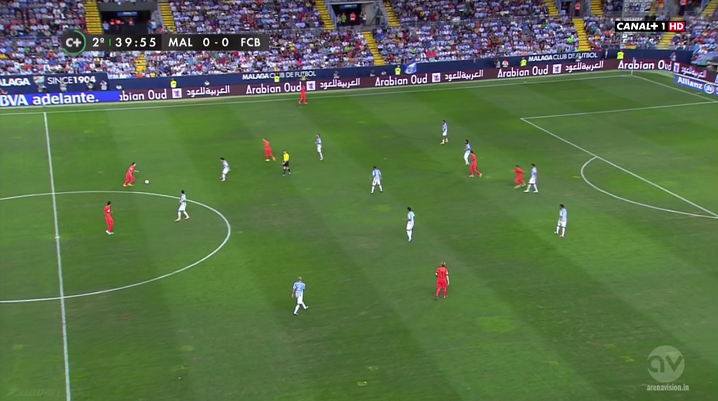 In the second half Málaga pressed higher and harder and forced Barça to rush their play out from the back. The home side consequently had a greater proportion of the ball than in the first half and repeatedly advanced into Barça’s half. Piqué, Bartra and Busquets found it almost impossible to play good passes out and the influence of Rakitić and Iniesta began to diminish as they found themselves constantly chasing clearances and trying to win second balls.

The first fifteen minutes of the second half saw Málaga grow in stature and Barça look increasingly uncomfortable. It was unclear whether they dropped deeper as the result of a tactical choice made by Luis Enrique in order to draw the home side out and create space to exploit at transitions, or whether it was the natural result of Málaga’s superior organisation and aggression. 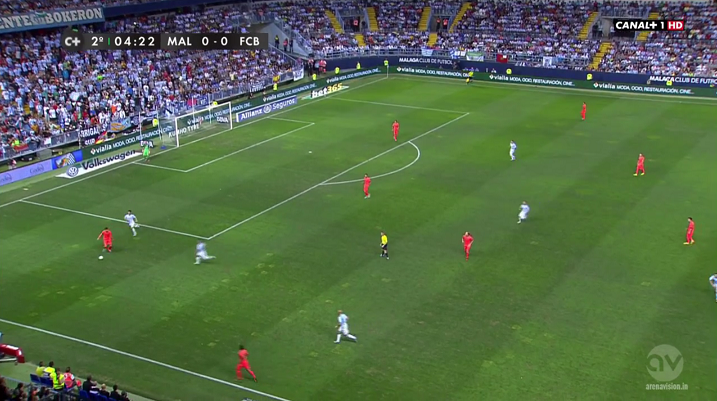 Luis Enrique’s response – to replace Neymar and Pedro with Sandro and Munir – only served to further embolden the hosts. Barça’s attacking movement, which was uninspired enough already, became even more pedestrian and a 0-0 became inevitable. The introduction of Adriano followed as Barça sought to increase their threat from the wide areas Málaga were happy to concede, but again this achieved little besides preventing a second yellow for Douglas.

If there is one positive to be taken from this game it is that even though Barça’s attack was nullified worryingly easily, there was little sign of them conceding. Although the defence was bullied, it didn’t give up any clear cut chances and the best Málaga could muster were shots from distance.

Aside from that, there were only negatives. Perhaps the worst thing is that given the simplicity and the effectiveness of Javi Gracia’s approach, which he presumably formulated having watched Barça struggle against the same deep 4-3-3 away to Real Sociedad last season and to Villarreal in this campaign, it won’t be the last time Barça are frustrated this way this season.