You guys are killing it with them FanPosts!!! Please keep them coming! - Renato

A huge topic of discussion especially for me and a few fellow posters (no, not talking about connotation) on here has been the form of Neymar, his decision making, and his output in Barcelona's offense this year. While most of us expected to see Neymar mature and perform up to the high levels he performed in October of the 2015/16 season, or just build up over how he performed in the 2014/15 campaign, he has been largely underwhelming this season, at least in my opinion.

While some blame these underwhelming performances from Neymar on the tactics, or him putting extra effort in defense, others think this is the result of poor decision making from the golden boy from Santos. Let's take a look at what has changed in Neymar's performance as compared to the previous seasons.

For the player of his talent, Neymar really takes over a large defensive workload, and while it is true that Neymar is more involved in defensive actions than his fellow trio members, he has not been putting any extra shift as compared to his previous years as a Blaugrana, which is often argued, at least that's what his defensive stats say. 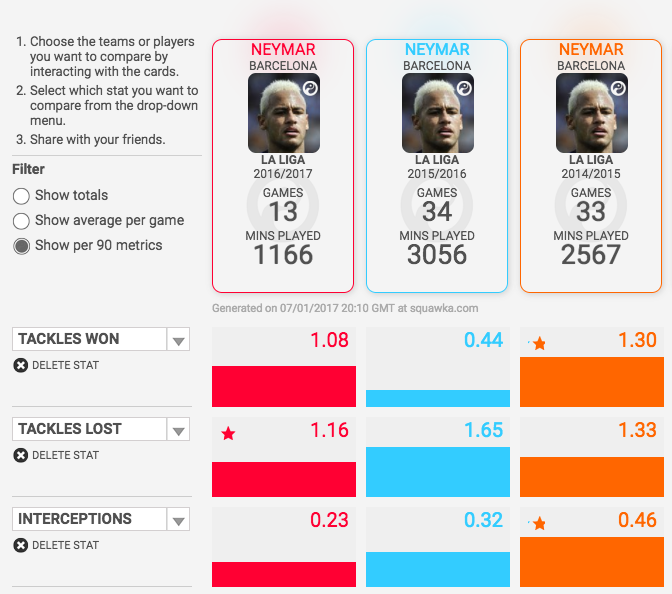 I have excluded the data for clearances and blocks, which was pretty low to be considered significant. As is pretty clear from the above table, the number of tackles Neymar is putting in are quite similar to his previous two seasons, and the number of interceptions has dropped, although that could even out as the season progresses.

He is good, and he has contributed more than most forwards would do or most forwards actually do, even in his subpar season, but has he been living up to his own high standards? I think not. Again, let's take help of his offensive stats here. 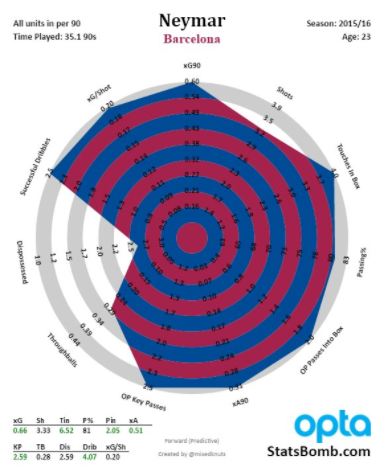 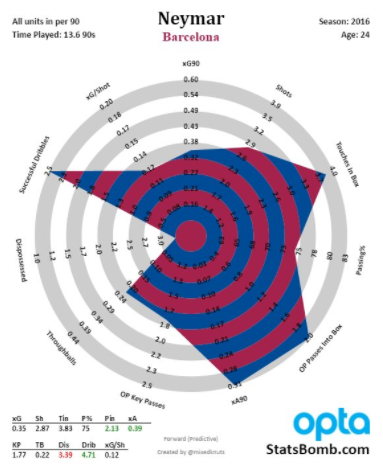 I am sure most of you understand the meaning of the two images. For those who don't, I'll go over the stats that are not so common:

xG/shot- It measures the theoretical number of goal the player will score based on quality of shot. It is basically the odds of scoring a goal from the shot.

xG90- The average number of goals a player would have scored per 90 minutes based on quality of shots taken.

xA90- The average number of assists a player would make per 90 minutes based on the type of pass provided.

Again, I'd warn you, this is how I interpreted these stats, anyone with better interpretation is more than welcome to explain it to me and other guys.

How to interpret the graphs? Easy: the more area the coloured part covers, the better the player's performance has been.

Neymar's actual goal contribution has drastically dropped with his xG90 dropping from 0.66 to 0.35, and his actual goal contribution from 0.71 to 0.31 per 90. This could very well be explained by the number of touches and the number of shots he is taking from inside the box. The number of touches Neymar is getting inside the box has dropped from 6.52 in the 15/16 season to 3.83 this term, whereas the number of shots from inside the box has dropped from 2.83 last season to a mere 1.78 now, which can partially be attributed to Messi's increased presence in the box. Messi is taking 3.6 shots in the box as compared to his 3.1 last season.

It looks like a mix of change in his positioning combined with some poor decision making that has impacted Neymar's offensive contribution this season. In the last 2-3 games, I have personally seen the decision making improve, and I sure wish he starts performing to the high standards he has set for himself.