Good job by Alex Song (LORD!!!) on what he thinks would be necessary to win the league. What do you guys think? - Renato

We are nearing the two-thirds mark for the La Liga season, and the situation is looking... questionable, to say the least. Barcelona is only one point behind Real Madrid, our title rivals and our arch-rivals in general, but they also have two games in hand due to the Club World Cup and the delay of game with Celta Vigo. That's a potential six points that they can put between us in the standings.

Now it's true that Barcelona seem to be slowly but surely grabbing a hold of their game play and bringing their quality under control, but right now the team seems to be undergoing some sort of fatigue, maybe due to all the Copa del Rey fixtures and whatnot. Or maybe it's due to the confusion of Luis Enrique trying to incorporate all of the new signings into the team and having a hard time figuring out the best combination to get the team in shape.

So in this post I want to focus on what our "dream team" used to be and what each new signing might have to offer to the team, and, using this information, come up with a plan, however inexperienced I may be with tactical analysis. After all, this is a FanPost, not a Times article.

So this team is what Barcelona won the treble with the second time around, in the 14/15 season. 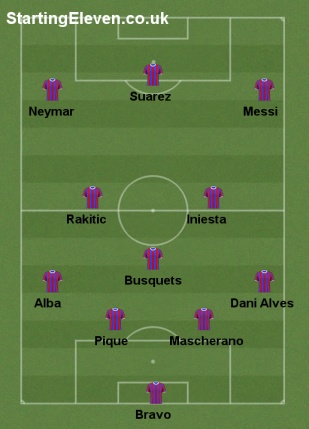 This was the dream team, with the attacking triumvirate and the solid midfield and the attacking fullbacks that controlled the side of the pitch. Busquets was in world-class form as a pivote and Rakitic and Iniesta were the maestros of the midfield that controlled the pace of the game. The 'MSN' combo doesn't need an explanation, and the defense was very solid. With the slow buildup play that was traditional at Barcelona combined with the quick counters offered by the introduction of Suárez and Neymar, this team was a solid plate of armor that had very few weaknesses. This is just my opinion, however.

And this is the team that we have now. 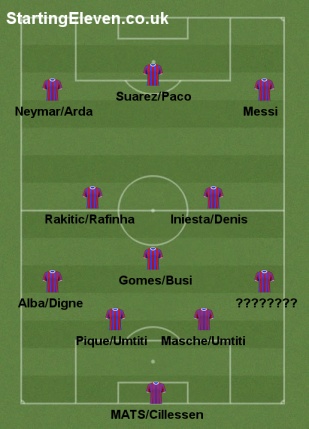 Oh, what a team this is.

This is where we are right now. It's obviously a bit of a mess. There is no clear right-back (although Aleix Vidal seems to be doing okay for now) because Sergi Roberto honestly does not know what he is doing in that position. He had a few good runs but is clearly lacking the defensive mindset that should be present in a fullback. André Gomes has been inconsistent (excellent in form, terrible when not, there is no middle ground) and definitely not up to par with Sergio Busquets, whose performances have also been criticized in recent times.

Rakitic is making less and less appearances under Lucho, and Rafinha has been injured for a while and just came back a couple weeks ago. Paco is just... Paco and when Messi leaves the game, the play goes out of control. The only shining signings this summer are Denis and Umtiti, who have been very good in reading the game and offering support, and Cillessen seems to be finding his feet on the goal. Again, this is just my opinion and there may be differences in points of view.

So where should we improve? I don't know deep tactics like others may and I can't say anything about improvements of the playing philosophy, but what I do know is each players' attributes and what they can give. So here goes nothing.

Starting off, Arda Turan is not a natural central midfielder. Luis Enrique, however, seems to be putting him on the spot when he deems it necessary. Using him up front instead of Neymar when Neymar is injured or suspended, as he was in the last game, would be ideal; however, Turan is a real talent and whether or not you like him, he brings physicality, or the muscle, that is hard to find at Barcelona. It would be a waste to keep him on the bench when playing against teams that really fight for the ball in the defense like Athletic Bilbao and Atlético Madrid.

Denis Suarez, while not as strong as Turan, is a good winger and good with his feet. When playing against teams like Atlético, though, where matches start to seem less like football and more like an episode of WWE RAW, it is not good to use him in the midfield position where most of the jostling goes around, or on the wings, where the play starts to look like Newton's cradle where players get knocked around like nothing.

Paco does not offer the runs inside or the clinical finishing Suárez does (Honestly, if not for recent performances, i would be screaming for his head on a platter becasue he was a waste of money). What he can offer, however, is his positioning in the box. He may not track back like Luisito does when the team loses possession, but Paco seems to know where to be when the ball is crossed into the box. Against less defensive-minded teams, Paco might be very useful to exploit holes in the defense and give Suarez a break.

I could go on and on, but the point I wanted to get around to is this: Luis Enrique needs to look at the opponent's profiles a lot more carefully. He needs to come up with a rotation plan that is opponent-dependent, not self-dependent. In other words, you cannot go into a gunfight with a knife just because you don't have a gun. That's stupid. Instead of looking at the player's form too carefully, look closer at what the next opponent's playing style is. Who knows, maybe the player in question is out of form because he's playing against a team that he can't play at his best, style-wise. And keep a consistent rotation. Using a player for five games in a row then dropping him for weeks even though he has no injury, or substituting a player in or out when everything is working out, is unwise.

Barcelona is slowly coming back, and they won 7 out of their last 9 games without a loss to account for. If Lucho can figure out what works and what doesn't before it's too late in the season, and trust me, there is time, Barcelona can surely look forward to a good result in the months to come.

Will Barcelona win the league?