I went to Miami to watch Napoli vs Barcelona, and it was awesome

Share All sharing options for: I went to Miami to watch Napoli vs Barcelona, and it was awesome

Barcelona and Napoli just finished a highly anticipated match in Miami, Florida. I was able to attend and cover the match for Barca Blaugranes and had some thoughts about seeing Barcelona play in Miami.

There was a plethora of action, despite it being a worthless preseason match with a two-leg aggregate score format, that we can take away from a football perspective. However, there was also a lesson in world football superpowers and how they overtake a city.

The entire city bubbled and flowed with excitement hours before the match even began. This shouldn’t have surprised me given Barcelona’s global reach, but it did. Days leading up to the match the usual amount of Barcelona shirts in the city seemed to double, and the excitement was palpable.

Heading into the Hard Rock Stadium the mood shifted from a simple sporting event to feeling as if I was attending a rock concert. Tailgating was taking place all around, songs were being sung, and the people showed up early in droves.

It became even more clear once I was in the box that the Barcelona fan base was much more represented than that of Napoli. Pretty sure the crowd cheered louder for Barcelona’s training staff than they did for Carlo Ancelotti. Yes, they like Valverde in Miami.

Barcelona went with a 4-3-3 on the evening, featuring Antoine Griezmann and Luis Suárez up top, Ivan Rakitic and Sergio Busquets in the middle, and Samuel Umtiti anchoring the backline.

Frenkie De Jong, Gerard Pique, and Ousmane Dembélé took bench duties. With Lionel Messi being out, I was disappointed with the absence of a Griezmann, Suárez, and Dembele front three to start the match.

The mix of youngsters and veterans in the lineup made for an interesting tactical setup. However, it was the anchors of Barcelona’s midfield that were the engine that created any chances for Barcelona. Rakitic and Busquets showed their metal in a meaningless preseason match. It was really wonderful to watch in person.

The first exciting moment of the match occurred in the seventh minute when Griezmann, despite his move to Barcelona rubbing some supporters the wrong way, got on the ball to a booming roar from the crowd and broke away towards the Napoli goal ending in a corner.

The rest of the first half featured Napoli peppering Barcelona with many effective attacks.

For some odd reason, Napoli’s technical director was sitting right in front of me in the press box. With each failed Napoli attack, a slight pound of the table would occur simultaneously with the click of his pen and the taking of notes. They moved him to a private room near halftime unfortunately. It was very enjoyable to observe.

Barcelona ended the first half scoring a well-timed goal from the feet of Busquets.

The movement and pace were excellent for Napoli all first half. They just never had the finishing touches to cap off a goal. Luckily for them, they unleashed their greatest weapon, the Umtiti own goal.

The half ended at 1-1. Despite one or two key Barça attacks, Napoli dominated and created real chances.

If anyone forgot that this was a preseason match, they quickly got a reminder. The second half saw Suárez and Griezmann get subbed off, and the infusion of youth in the lineup became more apparent.

De Jong made his appearance about halfway through the second half. The midfielder showed his pace and quick feet early on. Piqué and Dembélé joined him alongside Semedo. The four of them joining the youngsters, Rakitic, and Busquets really ignited the crowd once again.

Dembélé and De Jong paired for a scintillating attack along the left side immediately after coming on the pitch. Dembélé curled the ball into the post to send the crowd into a frenzy.

I’ve gotta say, seeing Dembélé’s speed in person was breathtaking. His acceleration on the ball was devastating. Despite taking touches a bit too strong from time to time, the Napoli defenders looked as if they had cement in their boots whenever he was running at them.

Rakitic blasted a goal home in the 79th minute that put Barcelona ahead for good. Tune into the second leg of this matchup on Saturday to see if Napoli can win this incredibly important series.

Gonna go see if I can find Napoli’s technical director now and ensure his table is okay after the fist pounding.

(Still looking for him.)

I couldn’t find him. But I did find my way to the press conference before heading out for the night. 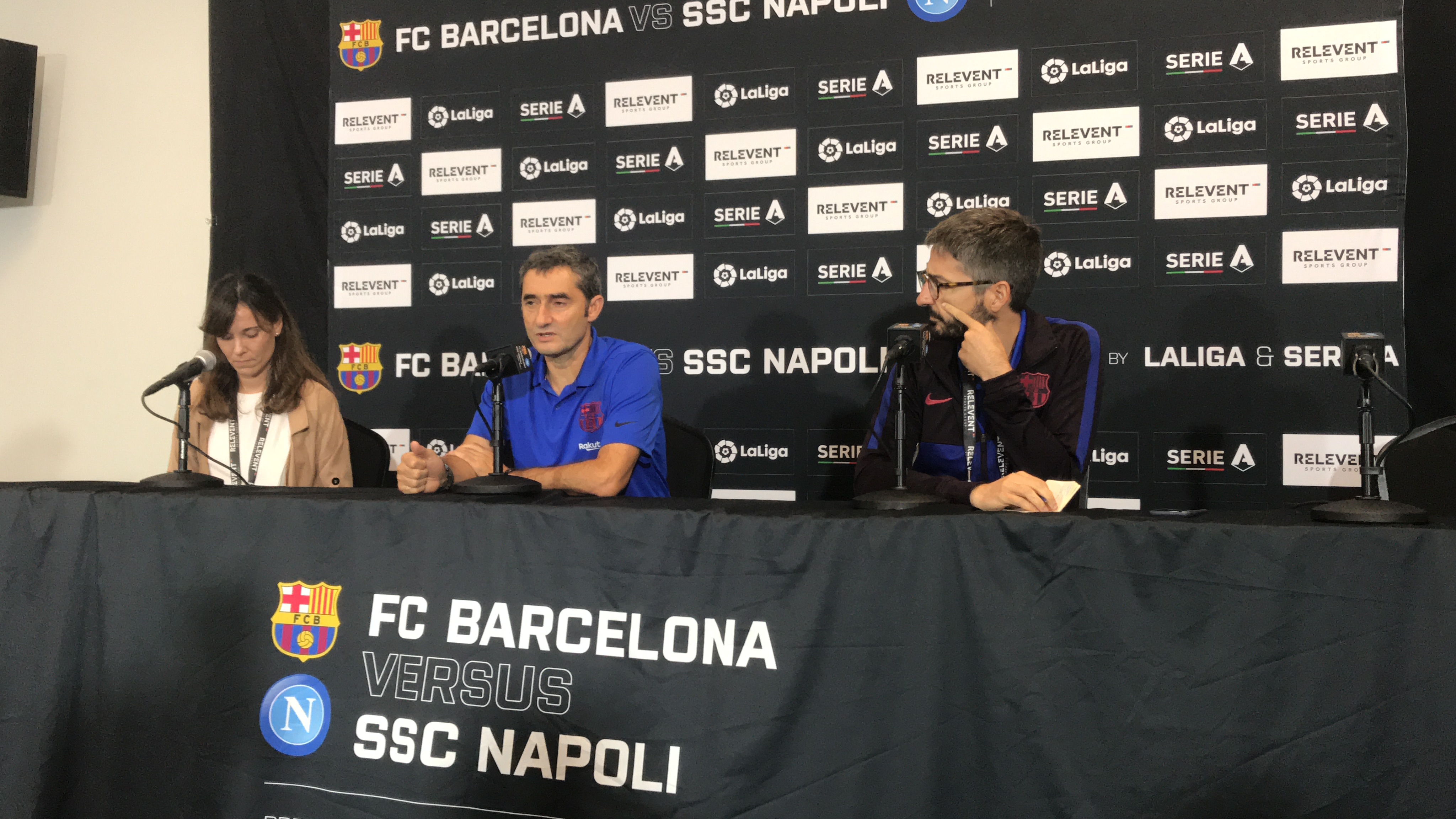 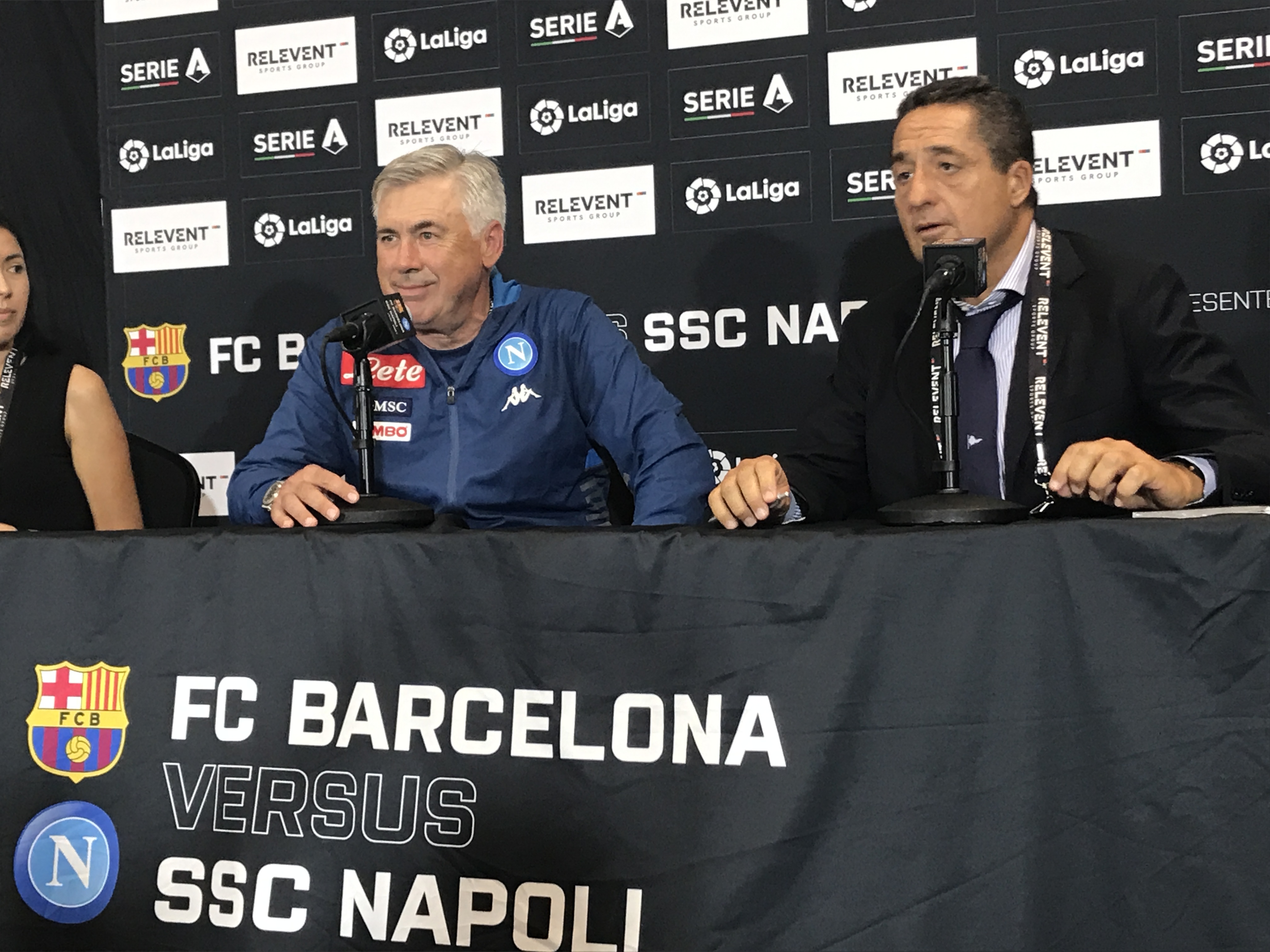 So this was my experience watching Napoli vs Barcelona from the press box. It was awesome.