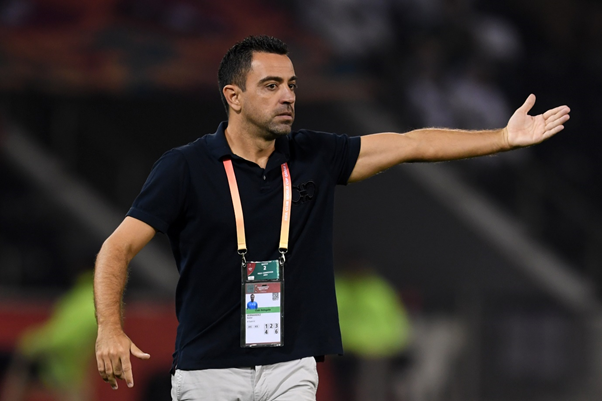 Xavi Hernandez returned to his boyhood club, albeit donning a different role, replacing another club legend Ronald Koeman as manager of the Catalan club. Here is what we can expect to see from his team:

The main intention of the team is to keep the ball, and this formation helps the team stretch the playing field out, both in terms of width and depth.

Replicating such a set-up at Barcelona, we could see something like this:

In a base 3-4-3 that can take the shape of a 4-3-3, Ter Stegen starts in goal. Oscar Mingueza makes a strong case to start at right back because of his ball playing abilities, but Ronald Araujo’s recovery speed and defensive awareness means he starts in the RB/RCB hybrid role. In the absence of Gerard Pique, Eric Garcia nails down the central spot, and his skill-set is best suited to play the role of the Libero. Clement Lenglet had a run of solid, if not spectacular performances as LCB under Koeman, but his lack of speed and nervousness while passing under pressure may tempt Xavi to give the discarded Samuel Umtiti a chance at redemption.

Frenkie De Jong will have a tailor-made role as a 6 in the double pivot, and could work alongside either Nico or Sergio Busquets equally well. Xavi will need to effectively manage Busquets’ minutes, while also ensure that the young Nico is not overburdened or given too few minutes. The double pivot shielding a 3 man back means either one of Frenkie and Nico will be allowed to push higher up, while the other sits deeper. Such rotations and flexibility were an integral aspect in Al-Sadd’s build up. Pedri and Gavi are natural choices to play as the advanced 8s ahead of the double pivot, while fan favourite Riqui Puig would also fit effectively in the same role.

Jordi Alba is a necessity on the left wing, and the Spaniard has held the entire flank on his own the last 3-4 years in the absence of a natural left-winger. Dest could compete with Ousmane Dembele to execute a similar function on the right-wing.

Ansu Fati and Memphis Depay make compelling cases to occupy the 9 role, and given the Spanish wonderkid coming off a long injury, Xavi may want to ease him back into the line-up. But since our XI lacks enough goal-scorers, Xavi may also be tempted to drop an 8 to accommodate Fati, and play him as an inside forward in possession. All in all, 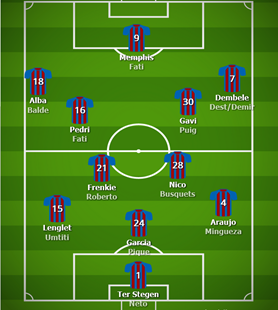 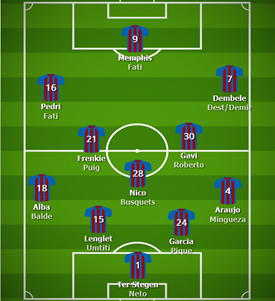 This line-up is far from perfect though. The lack of a quality left footed centre back leaves our left flank vulnerable. Furthermore, Memphis Depay is the only natural goal scorer in the set-up. While this formation does provide the team with an optimal utilization of the mid-field depth, the lack of quality finishers and a solid defense may mean it is unsustainable.

Strengths: Xavi is coming to Barcelona on the back of winning 7 titles with Qatari side Al-Sadd. He achieved this while also getting them to play a brand of football Barcelona would be envious of. In the words of Santi Cazorla, who played alongside Xavi for the Spanish National Team, and under him at Al-Sadd,

"He has a clear idea of football. He wants the ball and to be the protagonist. He is going to do it in any team in the world that he trains."

"It’s what Barca need, to return to their style."

"Xavi likes a lot of possession. He alternates between 4-3-3 and 3-4-3. Xavi always wants more and more possession."

"Without the ball, we squeeze a lot in the block. He has an idea from the good years at Barca when they pressed very high."

Furthermore, Xavi commends immense respect over the dressing room. A handful of players have played alongside the Spanish maestro at the club, while there are also enough players in the team who have grown up watching Xavi at his best. The support and awe that Xavi will receive will undoubtedly help him implement his style of play and motivate the players who have had a rough season so far.

Weaknesses: This is Xavi’s first job in European football. Xavi himself noted that he had 7-8 players from the Qatari National Team at Al-Sadd, as well as other players like Andre Ayew and Santi Cazorla. While even at Barcelona he has a crop of players who are superior in quality in at least 90% of the games we will be playing, European football is simply in a different league in terms of quality. Barcelona play against teams that don’t afford as much space, and play in more organized defensive structures. Xavi has a lot of tricks left to learn in the trade, and he has to do so in a club that offers as little time as it does patience.

Opportunities: Xavi has a plethora of talent to work with, in Ansu Fati, Gavi, Nico, Pedri, De Jong, Puig, Balde, Dest, Mingueza, Eric Garcia, Araujo, Demir and B team players like Jandro, Pena, Tenas, Ilias, Comas etc. Combined with the experience of veterans like Busquets, Pique, Alba and Ter Stegen, Barcelona has the foundation set to build towards a successful long-term plan. Xavi also has the opportunity to bring in a quality backroom staff. Albert Capellas is already working in the club, and another interesting option would be to induct Javier Mascherano into the coaching staff. Currently in charge of the methodology and development department, the Argentine was a motivational figure as a player and his man management skills would be crucial. His tactical adeptness is also a huge plus point, and Luis Enrique recognised that and would often communicate in game changes to the rest of the team via Mascherano. 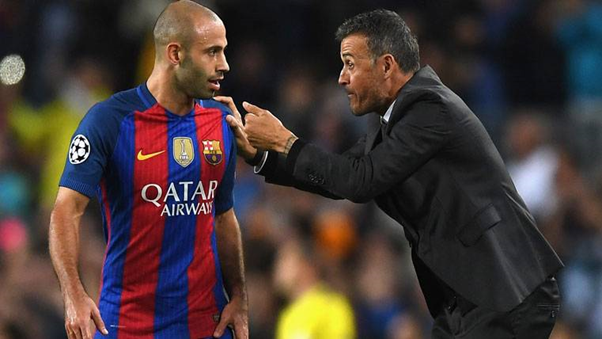 Threats: The current economic situation of the club means Barcelona can do very little to fill gaping holes in the squad. The team are currently placed 9th in the league and a precarious second in the Champions League. Still reeling from the loss of Lionel Messi and a horrid start to the league, FC Barcelona are in a position that even proven managers would struggle to transform, and Xavi Hernandez certainly has his hands full.

What are your thoughts on Xavi at Barcelona??