Pep Guardiola Asks For Thiago Alcantara to Bayern Munich - Is "Tapping Up" Still a Thing?

"Thiago or no one," is how FC Bayern Munich manager, and former Barcelona manager, Pep Guardiola described his situation. "See you in Manchester," David De Gea wrote on Thiago's matchball after the U21 World Cup. Is it worth it to still worry about tapping up?

Share All sharing options for: Pep Guardiola Asks For Thiago Alcantara to Bayern Munich - Is "Tapping Up" Still a Thing?

Tapping up - sometimes called "tampering" in American English - occurs when a team attempts to persuade a player of another team to join them without the permission of the player's current team.

Such tactics, while not illegal, are forbidden by professional leagues around the world and carry fines. The long transfer saga of Cesc Fabregas from Arsenal to Barcelona ended with many fans of the London club crying foul over the alleged tapping. Arsene Wenger himself has accused competitors of impropriety when attempting to sign his players.

However, it's become so commonplace that one has to wonder what the point of the rule is in the first place. During this transfer window, it seems harder to talk about a player who was not tapped up as opposed to one who was. 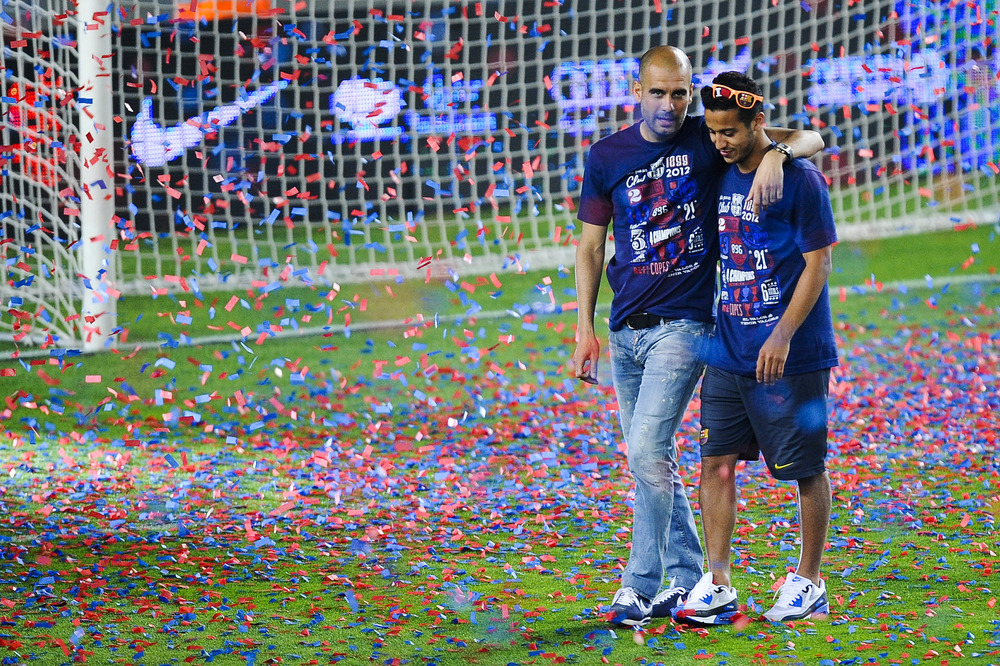 A lot of the behavior, one could argue, was not technically tapping up - i.e. a manager hinting with admiration remaining sufficiently vague, by saying something like, "if any player of X's caliber were to join, of course I would be extremely happy."

The rules are murky, and it's relatively easy to weave around them. For all the constant attempts to sign Fabregas, Barcelona never actually met any repercussions.

Ex-Nottingham Forest manager Brian Clough once boasted he "tapped more players ...than the Severn Trent Water Authority." A prominent agent summed it up to the BBC: "It has always been part and parcel of the game." Former Aston Villa manager David O'Leary: "Everyone knows it is happening."

English legend and former Barcelona striker Gary Lineker goes one step further. He says he " doubts that many transfer deals have ever been done without a tapping up process".

Recently, the UK-based tabloid Daily Mirror accused Real Madrid of tapping up Gareth Bale by printing mock up jerseys of him. David Villa was supposedly contacted by Wenger and Tottenham Hotspur's Andre Villas-Boas. Brazilian teammates have played a part in encouraging Neymar to sign for Barca. The list goes on. Name any big name in the transfer market and someone is surely attempting to tap him up.

Which brings us to the latest hot topic: Thiago Alcantara. Manchester United's David De Gea, a teammate of Thiago's in the Spanish U21 team, signed a ball for the young Catalan with "See you in Manchester!" Today, FC Bayern Munich manager Pep Guardiola openly stated his desire to reunite himself with the Barcelona midfielder.

So is it worth getting bothered over? Worth calling the football authorities?

Or, does Lineker have a point? He once wrote "can I please ask why on earth they persist with their antiquated, farcical tapping up rule? I have never understood the need for it and never will."